A Grade I Listed Building in Ravensworth, North Yorkshire 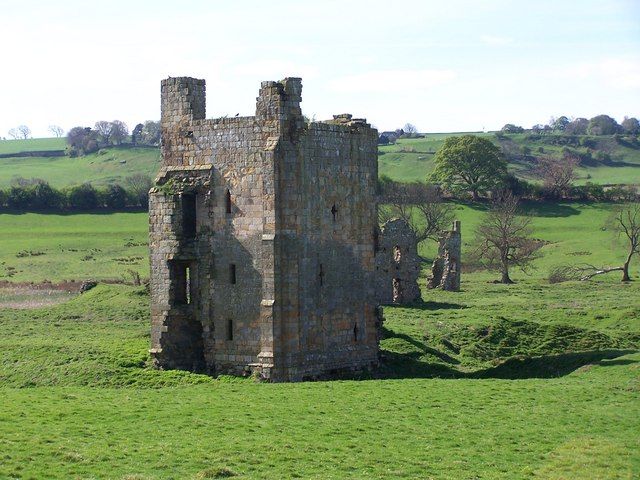 Ruined castle and park wall. Late C14. For Henry, Lord Fitzhugh. Walls of
sandstone rubble, mainly faced with square-cut ashlar. 3-storey tower
attached to main gateway in north-east corner; foundations of curtain wall
with fragments of 2 towers to south-west and south-east; part of belfry
tower, formerly attached to chapel; central rectangular range of less
architectural pretension, probably stables. Gateway: depressed
continuously-moulded 2-centred-arched opening, of 2 orders, the outer one
chamfered, the inner one convex, with hoodmould with small head stops, and
on the inside a portcullis slot. Attached to the north-east, a 3-storey
ashlar tower, with offset plinths, and double buttress to northern corner;
on the north-western side, on each floor a cruciform loophole; on the north-
eastern side a single-light window on each floor and an incomplete garderobe
tower to the eastern corner; on the south-eastern side, shouldered doorways
with convex chamfer on ground floor to left and first floor to right, the
latter formerly with an external staircase; to its left a trefoiled single-
light window to straight-flight mural staircase leading to second floor,
which has a window of 2 trefoiled lights under monolithic lintel; turret to
right above staircase up to roof walk. Belfry: ashlar; parts of 2 walls
standing almost to full height of a very tall and narrow tower, with a
Latin inscription below the second-floor string course, and with a very tall
chamfered segmental-pointed arched doorway to north. The stable block has a
complete 2-storey gable to north west, with a central doorway. The Park
Wall, constructed around the medieval hunting park by licence in 1391,
survives almost intact, partly rebuilt but in many stretches clearly
surviving in medieval form, of tapering section, constructed of large
roughly-squared stones, standing approximately 2 metres high. Interior of
gate tower: on ground floor, across the northern corner, the remains of a
fireplace; on first floor, a chamfered shouldered fireplace in the north-
western side; on second floor, across the northern corner a fireplace, the
lintel on corbels framing a coat of arms; the beam slots for the first and
second floors run in opposite directions; first-floor doorway into room from
outside staircase has rebate for door to open into. The Castle and outlying
earthworks are scheduled as an Ancient Monument. VCH i pp 88-89; Peter F
Ryder, "Ravensworth Castle, North Yorkshire", Yorkshire Archaeological
Journal, vol 51, 1979, pp 81-100.