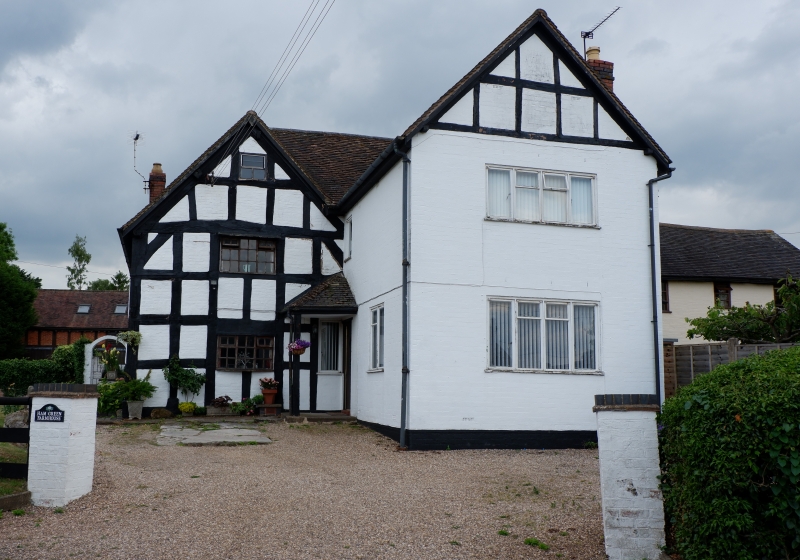 Farmhouse, now divided into two dwellings. C17 with mid-C20 alterations
and additions. Timber-framed, painted brick infill, replacement walling
and additions; machine-tiled roofs. Hall and cross-wing plan; hall part
aligned north-west/south-east with large external chimney at north-west
end and brick stack; intersecting cross-wing at south-east end of two
framed bays with external truncated C19 brick stack to its south-east side
elevation. Two storeys and attic. Framing: cross-wing has four panels
from sill to wall-plate, short straight braces in upper corners, collar
and tie-beam trusses with two struts to collar and raking struts in lower
corners. Framing of hall part not visible externally. North-east front
elevation: a C20 wing of two storeys projects from the hall part which
has a 4-light casement on both floors at its gable end; there is a 2-light
ground floor casement andafirst floor rectangular light in its left side
elevation and also the main entrance which has a hipped tiled canopy and
C20 door; to the right of the C20 wing is a 2-light first floor casement
and a half-glazed C20 door which is the main entrance to the other dwelling;
cross-wing gable end has a C20 ground floor and window, a 3-light first floor
casement with a plank weathering and an attic light. Interior: hall part
has framing intact (apart from rear wall), stop-chamfered main ceiling beams
and a large fireplace. A two-bay dairy wing at the north-west gable end now
forms the main part of the other dwelling. It has two large C20 bow windows
on the ground floor and two 3-light casements and a rectangular light on the
first floor of its north-east front elevation. There is a C19 lean-to addition
at rear which overlaps with part of the main building.