A Grade I Listed Building in Settle, North Yorkshire 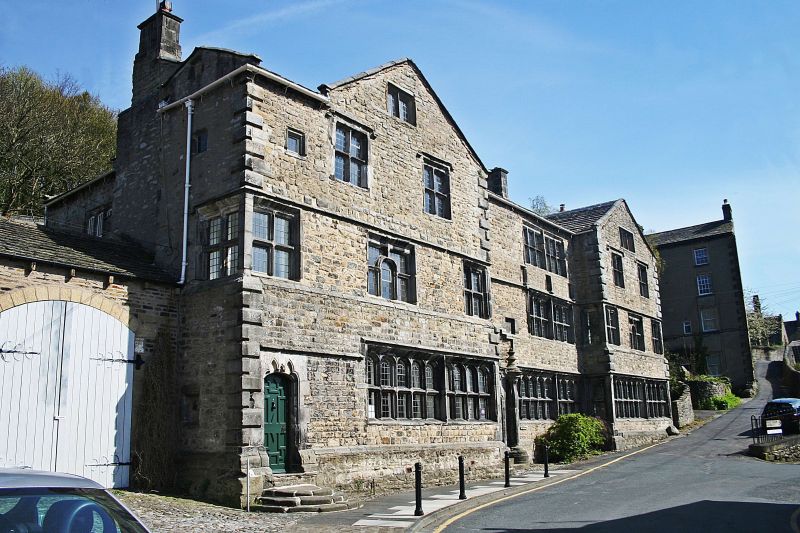 Hall, now house and shop. 1670s by Richard Preston. Coursed rubble, stone
dressings. Stone slate roof. Lobby-entry plan. 3 storeys, recessed centre and
2 projecting gabled wings. The principal entrance to left of centre has an ornate
surround: stepped bases support 2 unusual columns; with panelled flutes, which
narrow near their necks, before swelling again; they have moulded capitals and
finials. A massive lintel is decorated with traditional C17 Craven decoration
which incorporates a Gothic motif, it is capped by a finial. c.1980 door. To the
right is a 9-light double chamfered mullioned and transomed window with bead
mouldings, king mullion and round-heads, the right hand light is now blocked. A
single light continues this window into the right hand wing which is similar, but
with 11 lights and ovolo mullions and transoms, this window continues into the
right hand return. The left hand wing has a similar window, but with 9 lights,
which is also continued into the right hand return of the bay. To its left is an
entrance with a similar lintel to that of the principal entrance but less elaborate,
the door is c.1980. A continuous dripmould rises over the principal entrance. The
remaining windows have flat heads. The central bay has 6-light double-chamfered
mullioned and transomed windows on the first and second floors with 3 blocked
single lights between the floors. A 3-light double-chamfered window on the first
floor of both wings has ovolo mullions and a transom which rises to form an
arch over the central lower light, which supports a single mullion above. Both
windows are flanked by 2-light double-chamfered mullioned and transomed windows
which continue into the left and right hand returns of both bays. On the second
floor of each wing are two 2-light double-chamfered mullioned and transomed windows
with hoodmoulds. The left and right gables have a blocked 2-light and 3-light
double-chamfered mullioned window respectively. The corners of the wings are
defined by chamfered quoins, except where the ground and first floor windows
return. Gable end projecting chimney stack. Interior: panelled hall contains
inglenook fireplace on north wall with moulded surround, basket arched head and
21 joggled voussoirs. Lobby entry to left of fireplace has chamfered surround and
basket arched lintel; plank door. Similar entrance to right of fireplace but with
round-headed lintel. Oak dog-leg staircase in hall has closed string and barley
sugar balusters. Room to north on ground floor is reputed to contain an inglenook
fireplace with moulded surround and basket arched head of 21 voussoirs.