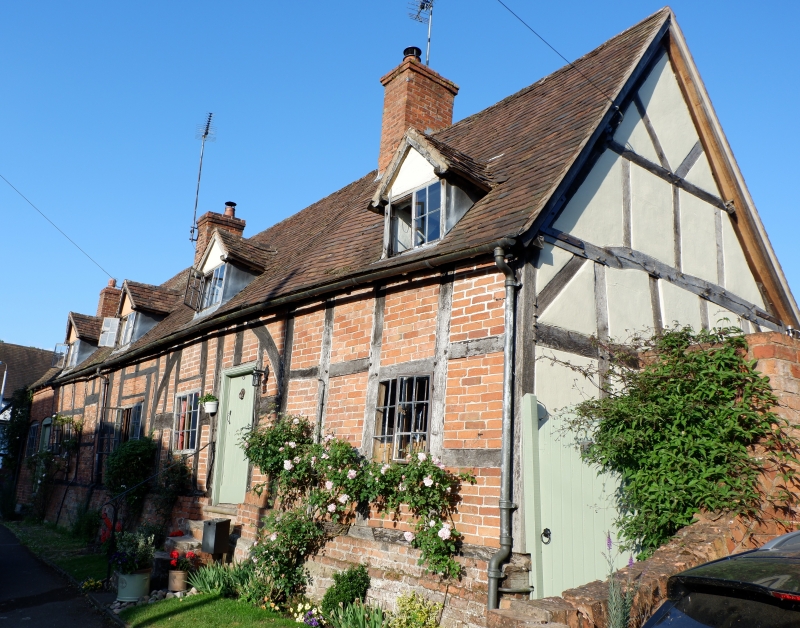 Row of two houses, now one dwelling. c1500 with Cl7, mid-C18 and mid-C19
alterations; restored late C20. Timber-framed with brick and rendered infill
on tall brick plinth; plain and machine-tiled roof. Four framed bays aligned
north-east/south-west; large chimney with brick ridge stack at junction of two
north-easternmost bays, and also two south-westernmost bays where it forms a
baffle-entrance; additional C19 bay (lower in height) adjoins north-east end
and has a large external chimney with offsets at its gable end. Single storey
and attic with dormers. Framing: mainly three panels from sill to wall-plate
and collar and tie-beam trusses with struts; two rows of close-set studding
to north-west elevation of two central bays, the south-westernmost bay also
having large swept braces across the upper corners. The south-west end bay
has been largely reconstructed and is probably a Cl7 addition. Main north-
west street elevation: ground floor has two 3-light casements, a 2-light
casement and a 2-light mullioned window; four gabled dormers with 2-light
casements; ledged and battened door to right of second bay from south-west
end reached by a flight of brick and sandstone steps. C19 bay to left has
a 3-light ground floor casement with cambered head and a ledged and battened
door, also with a cambered head. Interior: framing mainly intact. Much of
timber re-used, notably purlins. Back-to-back fireplaces, one of which has
a bread oven. Original staircases survive to rear of chimneys, branching
to form separate staircase to each attic room. Some doors, floorboards
and original quarries survive.