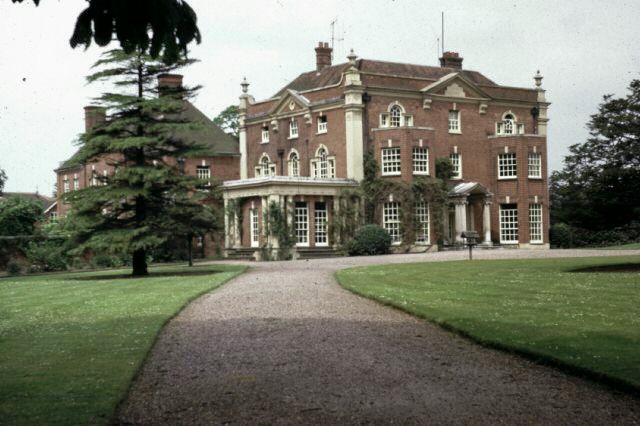 House, now nursing home. Mid-C18; altered and extended circa 1921 by Forbes and Tait for E Vaughan with further late C20 alterations. Finely jointed red brick with ashlar dressings; hipped plain tiled roof behind parapet with corner urn finials; large brick ridge and rear stacks. Three storeys with moulded eaves cornice. Three bays with giant end pilasters on pedestals and inset pediment on consoles above central bay. Outer bays have canted bay windows to ground and first floor levels added in 1921; they have panelled parapets and the windows have flat heads and moulded keyblocks; large twenty-pane sashes on ground floor and sixteen-pane sashes on the first floor; the second floor outer bays have Venetian windows. Central bay has twelve-pane sash windows on both first and second floors. Central entrance has a circa 1921 ashlar porch with an open pediment on Ionic columns. The door has a moulded architrave, key-block, double doors and a traceried fanlight. East garden front: three bays also with giant end pilasters on pedestals and inset pediment to central bay; ground floor windows are tripartite sashes with moulded cornices; fret and second floor has Venetian windows throughout (the windows of the first bay are blind and the glazing bars have been painted in).

Interior: 1921 and later C20 alterations to original layout. Main rooms on ground floor retain original ceiling mouldings and some ornately detailed fireplaces. Circa 1921 additions include large ballroom wing to rear west and also small single-storey addition to west of main south entrance front; this is of two bays with clasping corner pilasters, entablature and pairs of Doric columns flanking a pair of eighteen-pane sashes; this arrangement is repeated on the west side but there is only a single central window.

This entry was subject to a Minor Amendment on 13 October 2016.