A Grade I Listed Building in Soberton, Hampshire 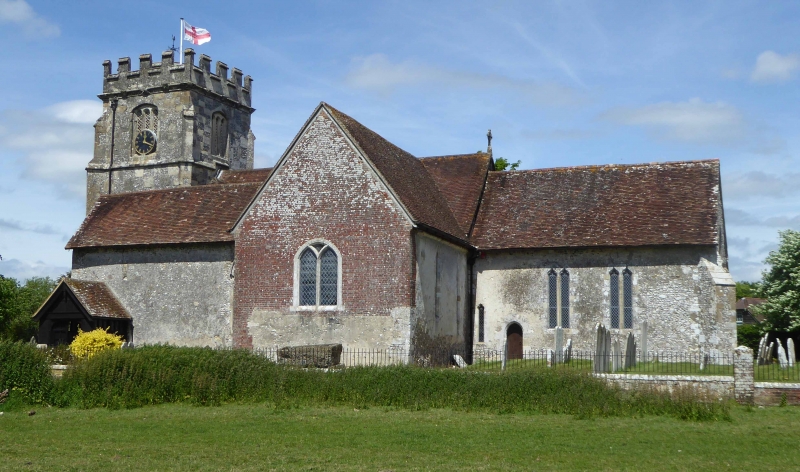 SU 61 NW SOBERTON
7/45 Church of St Peter
6.3.67
I
Parish church. Of Norman origin, but mainly C13 of several phases, some C15
details, early C16 west tower, Victorian south porch, restoration of 1880. Flint
walls, plastered in several parts, with stone dressings, and rubble stonework in
the chancel, tower of flint with irregular pattern of large stone blocks, brick
gable to the south transept. Tile roof, extended on the north side aisle and vestry,
separate roofs to the south aisle and transept, dormers to the nave. Nave of three
bays with north aisle and south aisle, both extended to the west, chancel with
north aisle (vestry), south transept (Curle Chapel). The earliest structure
survives within the square piers at the west of the nave, the arcade is mid C13
with octagonal columns, the chancel arch is c1300, the transept 1270 and the
chancel walls cl330. A former small west tower was replaced 1525 by a wider
structure which is still narrower than the nave, the west end of which is marked
by three arches on two octagonal columns. The old windows are coupled lancets
with ogee heads in the chancel and lancets in the east wall of the south transept,
and a Perpendicular window on the south side of the nave. Inside, the transept
or Curle Chapel has a recess between the deep splays of the lancets, with a
traceried arch on slender shafts, a sunk recess with a stone table supported by
heads on a column: a piscina is set diagonally in the south east corner: there
is a C15 tomb let into the south wall. There is a large wall monument (1736)
at the east end of the north aisle (with a bust set within an ornate classical
framework), several baroque wall monuments (of 1678, 1688, 1698) and others of
later date and lesser scale. Outside the south transept, there is a crude stone
sarcophagus, probably of Roman origin, unearthed in the locality.