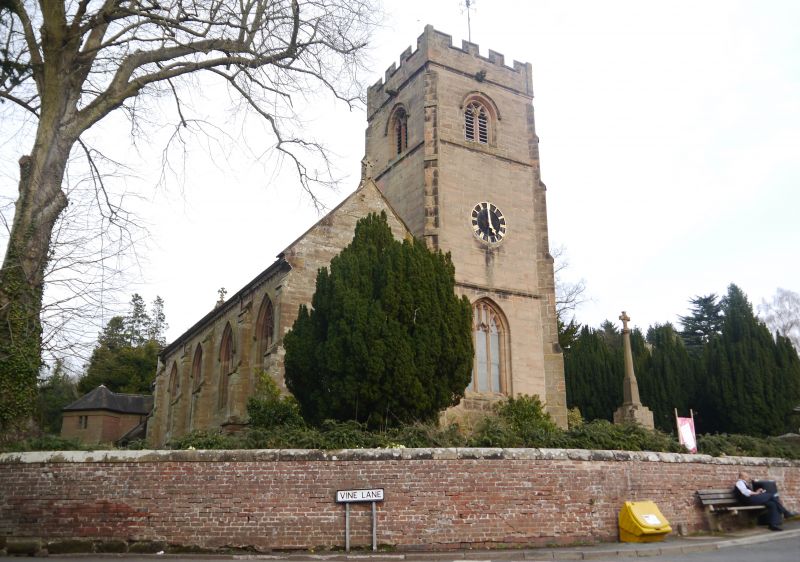 Parish church. C12 origins; mid-C15 alterations and additions; further
alterations c1837; restored 1864-5 by Kirk and Parry. Part dressed coursed
sandstone rubble, part sandstone ashlar; plain tiled roofs with parapets
and finials at gable ends. West tower, three-bay nave with south porch,
two-bay chancel with north vestry and organ chamber. Perpendicular style.
West tower: C15; three stages with strings, chamfered plinth and diagonal
corner buttresses with offsets; 3-light west window and south doorway;
second stage has west clockface and rectangular light in north and south
elevations; 2-light louvred bell-chamber openings with hoodmoulds and head
stops; embattled parapet at base of which is a gargoyle projecting from
centre of each face. Tower stair in south-west corner lit by loopholes.
Nave: south aisle added c1170 and widened in C15; north aisle added c1837;
both nave and north aisle rebuilt 1864-5; north aisle has separate gabled
roof with bracketed eaves and is of four bays with fourth bay flanking tower;
buttresses with offsets at bay divisions; windows are all of three lights
with hood moulds and foliated stops. South aisle has a catslide roof, a
diagonal west corner buttress and also an east end buttress with offsets;
there are two 2-light windows with square heads and also a pointed 2-light
window at each end. The central gabled south porch is mid-C19 and has a
pointed archway of two orders of which the inner order is shafted; restored
pointed south doorway within. Chancel: C15; moulded stepped plinth; diagonal
east end buttresses with offsets; all openings have hood moulds with head stops;
5-light east window btid two 2-light square-headed windows in south elevation
which flank an ogee-arched doorway; above the doorway is a C17 wall monument.
North vestry and organ chamber are of 1864-5 and form a continuation of the
north aisle with similar detailing; 3-light east window; lancet in north
elevation to left of large stone chimney on three corbels; small C20 lean-to
at east end. Interior: three-bay pointed nave arcades of two orders on
circular columns; the south arcade retains some C12 masonry and the columns
have trumpet scalloped capitals. C15 tower arch of two orders, the inner
of which is interrupted by moulded capitals. Chancel arch is of three orders
and a mid-C19 reconstruction and there are C19 archways from the north aisle
and chancel into the' vestry. Chancel has a C15 wagon roof; C19 roofs elsewhere.
Chancel has an ogee-arched piscina and there is a Latin inscription on the east
jamb of the south doorway. Also piscina in south aisle. C19 stone font in
form of column with cushion capital; three-sided font with traceried arcading
on stone base. Memorials: several in chancel including three C19 memorials
to Liell family on the north side and several to the Amphlett family on the
south side, one of which has spiral Corinthian columns, a broken segmental
pediment and coat of arms. Also two good memorials in the tower base; one is
probably C17 and has Corinthian columns, an open segmental pediment and coat
of arms; the other is in the form of a large cartouche decorated with putti
and an urn finial. This church retains some medieval masonry and a good
medieval chancel roof together with several memorials of particular interest.
(VCH 3 (i), p 52-3; BoE, p 121).