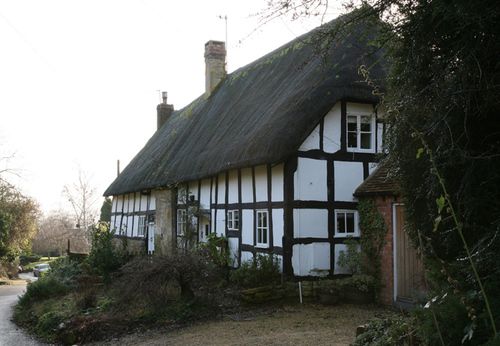 Row of three houses, now divided into two dwellings. C16, extended in C17
with mid-C19 alterations. Timber-framed with rendered infill on tall limestone
rubble base with some coursed limestone rubble end walling; thatched roof half-
hipped at west end with brick ridge stacks at east end and to west of centre.
Four framed bays, second bay from east end is a narrow cross-passage bay and
has a large rubble chimney backing onto it. There is also a large chimney at
the east end. Single storey and attic with dormers. Framing: two and three
panels from sill to wall-plate; truncated collar and tie-beam truss with four
struts at west end. North front elevation: ground floor has two 2-light case-
ments, a 3-light casement and a C20 rectangular light. There are two ledged
and battened doors; the right one has a flat canopy on wrought iron brackets
and is blocked with the main entrance to No 3 now situated in the west gable
end. Attic lights in west gable end flank a C17 window of four lights (now
blocked). Interior of No 1 inspected and has lateral main ceiling beams on
consoles and retains its large fireplace. The framing of No 1 suggests it is
earlier in date than the remainder of the building.