A Grade I Listed Building in Linton, County of Herefordshire 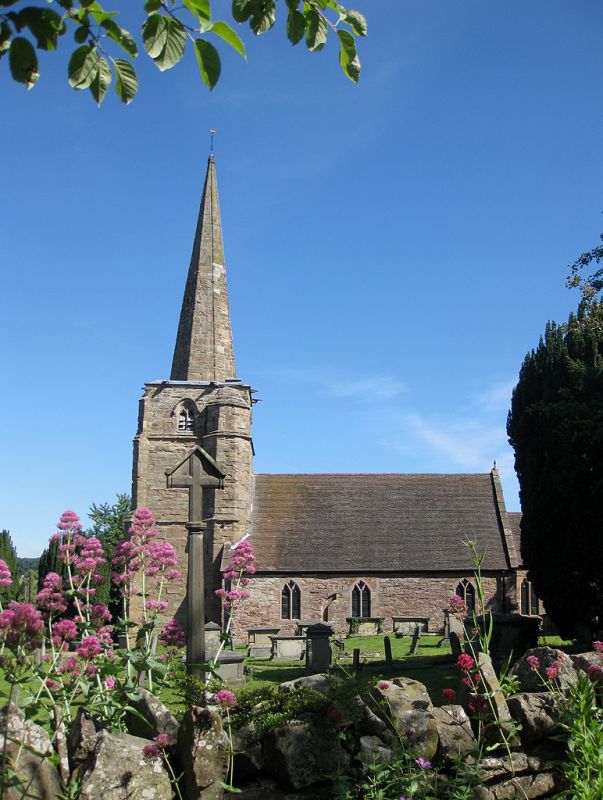 Church. Late C13 with C12 remains and late C14 tower with spire. Restored 1875.
Sandstone rubble with tile roofs. Comprises a west tower, nave with north
and south aisles, north porch, and lower chancel. The tower is of three
stages with diagonal buttresses and a plain parapet. The west doorway is
moulded and pointed. Above is a window of three lights with Perpendicular
tracery under a pointed head. The west bell opening is of two trefoiled
ogee lights with a quatrefoil under a pointed head. The stone spire has
moulded ribs at its angles. In the west wall of the north aisle there is
a lancet window. The eastern window in the north aisle wall is late C13
and of two trefoiled lights. The other two windows, one to each side of
the porch, are C19 lancets. The gabled porch has inner and outer chamfered -
pointed doorways. The south aisle wall is of three bays. The eastern
window is C14, of two cinquefoiled lights with quatrefoil under a pointed
head. The other windows are C19 and of two lights. Between the first and
second bays is the jamb and part of the head of a C12 doorway. The south
wall of the chancel is of two bays and has windows of two trefoiled lights.
Between them is a chamfered pointed priest's doorway. The north wall of the
chancel has two windows, the western one a single lancet, the eastern one of
two trefoiled lights under a pointed head. The east window is C19 and of
three trefoiled lights under a pointed head. Interior: south arcade of three
bays with pointed arches chamfered in two orders springing from round piers
with moulded capitals and bases. The arches are late C13 except for the
western one, which is late C14. The north arcade is of three bays and has
plain round arches, the eastern one narrower and probably a C19 insertion.
To the west is a length of blank wall, probably from an earlier tower. The
late C12 second pier from the,east is round, has a scalloped capital and is
too wide for the present arches. The tower arch is pointed and chamfered
in three orders. The moulded responds have moulded capitals. The lower
stage of the tower has a stone rib vault with a central hole for bell ropes.
The chancel arch is pointed with continuous double chamfer. Over the nave
is a collar rafter roof with soulaces, ashlar pieces, and four chamfered
tie-beams. The chancel roof has rafters with curved braces to the collars
and a longitudinal plate below the collars. Set into the east splay of the
south-east window is a rough piscina. In the south wall is a recess with
chamfered jambs and trefoiled head. Attached to the walls of the lower stage
of the tower are various memorials, including one to John Elmehurst (died 1662)
flanked by seated figures of women. (RCHM, p 119).