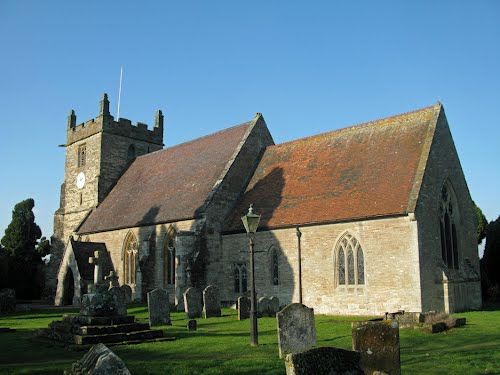 Parish church. C12 origins, extended in C13, altered in C15; chancel rebuilt
in 1853 by Butterfield; restored 1866-7 by Day of Worcester. Mainly dressed
coursed sandstone rubble with ashlar dressings; plain tiled roofs with parapets
at gable ends; chancel has decorative ridge tiles. West tower, four-bay nave
with north aisle and south porch; three-bay chancel. Decorated and Perpendicular
styles. West tower: C15 but retains earlier walling; two stages with strings
and chamfered plinth; diagonal buttresses with offsets at west end; clasping
buttresses above nave roof at eastern angles; C15 west window of three lights;
small rectangular lights above intermediate string in north and south eleva-
tions; 2-light ogee-arched louvred bell-chamber openings with square heads
except east elevation which has a partially blocked pointed opening; embattled
parapet with panelled and crocketted corner pinnacles and angel corbels below
(some missing); steps lead down to basement on south side. Nave: north aisle
added in C13i south wall rebuilt 1866-7. North elevation has diagonal buttresses
with offsets at ends and raking buttress at bay divisions; two easternmost
windows are of three lights and mainly C19; 2-light window in westernmost bay
and at west end; rebuilt pointed north doorway; 3-light C15 east window. South
elevation has buttress with offsets at ends and between easternmost bays; two
3-light and (at western end) a 2-light window; there is an angled projection
with moulded parapet and loophole at the eastern end. South porch: 1866-7;
gabled with end parapet and buttresses; pointed archway of one chamfered
order; three glazed trefoil openings each side; south doorway is pointed and
of two chamfered orders. Chancel: 1853; 3-light east window and beneath each
jamb is a small buttress; between those buttresses, attached to the wall, are
three late C17 tomb slabs to the Hanbury family; north elevation has two small
round-headed windows and a 2-light western window with a square head; the south
elevation has a 3-light eastern window, a central lancet with hood mould and a
similar western window to that in the north elevation. Interior: four-bay pointed
nave arcade has circular columns; the two easternmost have bell capitals, the
third has a stiff-leaf decorated capital; arches are of two chamfered orders
and pointed with geometrical motifs. Pointed chancel and tower arch of two
chamfered orders. C19 roofs with arch-braced collar trusses, cusped V-struts
and two tiers of swept wind braces, the lower tier of which is cusped. C18
panelling in chancel and also hatchment on north wall. C19 octagonal font
and pulpit which incorporates a C17 frieze. Parish chest in north aisle
formed out of solid tree trunk and with two lids. Memorials: in chancel is a
large memorial with a grieving woman leaning on a pedestal to Robert Boulton
Waldron, died 1823. Also memorial to Sir Martin Culpepper, died 1604, whose
raised tomb with effigies of himself, his wife and three daughters, is said
to be buried beneath the floor. On south side is a mid-C18 memorial to Edward
Gonnard and a mid-C19 relief to Russell Haywood. In the nave is a mid-C18
memorial with fluted pilasters, open pediment and coat of arms to the Boulton
family and also several others of late C18, early and mid-C19 date. In the
north aisle is a large memorial, probably C17 with a swan-necked pediment and
Corinthian columns and several C19 memorials. C19 glass in chancel and at west
end. Despite major restoration work undertaken in C19 the church retains much
of its medieval character and has some internal features of particular interest,
notably its nave arcade and memorials. (VCH 3 (i), p 117-8; BoE, p 151).