A Grade I Listed Building in Skillington, Lincolnshire 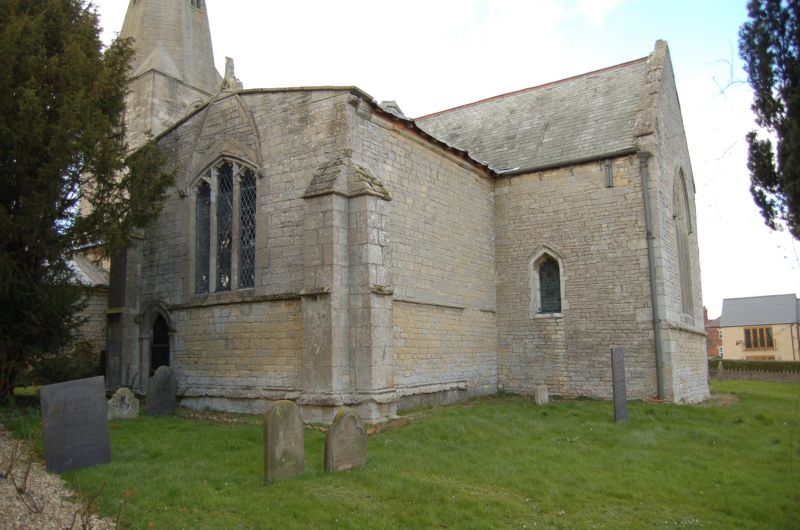 SKILLINGTON CHURCH STREET
SK 82 NE
(north side)
5/128 Church of S t.
20.9.66 James
G.V. I
Parish church. C11, c.1300, C13, C14, C17, C19. Coursed
limestone rubble, ashlar, slate and lead roofs. Western tower,
nave with clerestory, aisles, south porch and chapel, chancel,
vestry. 3 stage C13 tower in coursed limestone rubble has
plinth, 2 chamfered string courses, broach spire with 2 sets of
alternating lucarnes having double pointed openings to the lower
set, the gables surmounted by crosses. The bell openings have
paired lights with Y tracery, double chamfered surrounds and
hoods. On the south and north sides to the second stage is a C13
lancet with hood mould. In the west wall a 2 light Y tracery
window with hood mould. The C19 added vestry on the north side
has a plain tiled roof, a 3 light mullioned window and a pointed
doorway. The north wall of the north aisle has an early C17 3
light chamfered mullioned window with chamfered surround and hood
mould. In the east wall a 2 light C14 window with cusped heads
to the lights and quatrefoil over. The north east angle of the
nave has exposed Cll long and short work. The ashlar clerestory
is battlemented with a pair of 2 light openingshaving trefoil
heads to the lights and 4 centred arched surrounds with hood
moulds. The chancel has a stone coped slate roof and in the
north wall a small 2 light Y traceried window. The east window
is of 3 lights with cusped heads to the lights and restored C14
curvilinear tracery to the head. The south window to the chancel
is a C16 single light in deeply set concave 4 centred arched
surround with cusped head to the lights. The tall south chapel
has a low pitched lead roof and stepped corner buttresses, with
plinth and string course, a 3 light window with cusped heads to
the lights, triangular head and a steeply pointed hood with human
head stops which rises to a crocketed pinnacle at the roof gable.
In the south aisle a 2 light window with geometric tracery and
hood mould. The gabled south porch has a pair of heads to each
eaves, a double chamfered pointed outer doorway with angle shafts
and capitals with debased naturalistic foliage. The porch has
side benches and steeply pointed inner doorway with recut single
chamfered arch. The clerestory on the south side has a pair of
windows as the north and an additional single light with cusped
head and 4 centred arch. Interior. c.1200 2 bay nave arcades
with circular piers and responds, double chamfered arches and
hood moulds. The north arcade has nail head decoration to the
hood, imposts and octagonal abaci, the south aisle has a debased
form of stiff leaf carving to the capital only. The C13 tower
arch is triple chamfered, the outer 2 orders are continuous, with
inner octagonal responds and imposts. The south aisle has at its
eastern end a double chamfered arch to the chapel, with semi-
circular responds as the south aisle. The C13 chancel arch has 2
roll moulded orders and hood mould. The chamfered responds have
triple short shafts with stiff leaf capitals and annular bases on
tall chamfered plinth. In the chancel a further archway to the
south chapel matching that from the south aisle. A piscina in
the south wall with pointed head. In the south chapel east wall
a blocked pointed window opening. The south east angle of the
nave is exposed with Cll long and short work. In the south wall,
beneath the window, a C14 composition of a double piscina with
cusped trefoil over, a 2 seated pointed arched sedilia with
central shaft having naturalistic capital, and hood mould with
central human head carving. The adjacent priest's door has
pointed rear arch with hood mould with human head stop.
Fittings. All fittings are C19 except for a C17 oak chest and
the fine C14 octagonal font with cusped panels to the bowl and
richly ornamental octagonal stem. Monuments. Built into the
north wall of the chancel are 2 fine C13 grave slabs with crosses
fleury, one re-used in memory of John Bowfield, d.1730. There
are 2 stained glass windows to the memory of Rev Charles Hudson,
vicar, killed on the Matterhorn in 1865.