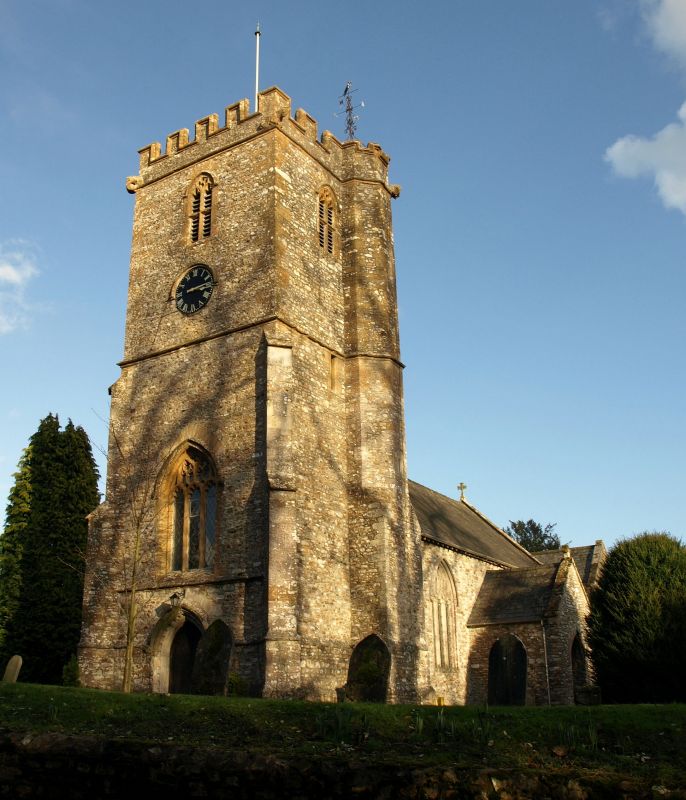 UPOTTERY UPOTTERY
ST 20 NW
7/132 Church of St Mary The Virgin
22.2.55
GV II*
Parish church. Late C12 origins, largely rebuilt in more than one phase in the C15,
various C19 alterations including a major renovation of 1875 - 76. Local stone and
flint rubble with original Beerstone detail and replacement Bathstone detail
including Hamstone on the upper stage of the tower; slate roof.
Plan: nave and lower chancel. The north aisle is not quite full length. West
tower, south porch and vestry on south side of the chancel. The chancel has
evidence of late C12 work. The tower is early C15, and the north aisle is probably
mid -late C15. The vestry was built in 1858. The church was thoroughly renovated
1875 -76. A new ringing chamber was built in 1892 and the organ loft dates from
1892.
Exterior: tall west tower of 3 stages with low diagonal buttresses and a semi-
octagonal stair turret on the south side. It has an embattled parapet and carved
animal and gargoyle waterspouts. Large transomed 2-light belfry windows with
Perpendicular tracery and hoodmoulds. Painted clockface on the west side. The west
doorway is C15; a Beerstone 2-centred arch with moulded surround including a band of
very weathered 4-leaf motifs and a hoodmould with worn carved label stops. Above is
a 3-light window with Perpendicular tracery and hoodmould with jewellled label
stops.
Around the rest of the church all the gables have shaped kneelers and coping and
most have apex crosses. The chancel and north aisle have diagonal buttresses. All
the windows are C19 replacements with Perpendicular tracery and most have plain
hoodmoulds. Gabled porch in centre on south side of the nave. It has a plain 2-
centred outer arch of which only the head is ashlar stone. The south doorway is a
2-centred arch with chamfered surround. At the right (east) end of the nave a
square-cornered projection is probably the disused rood stair turret. The 1858
vestry is Tudor Gothic in style.
Interior: the nave and aisle have C19 boarded wagon roofs, with moulded ribs and
purlins and carved bosses. The chancel has a Cl9 common rafter roof of plain arch-
braced trusses. The tall C15 tower arch has a moulded surround although most is
hidden by the organ loft. The chancel arch is C19; it has a moulded surround and
the inner ring springs from corbels carved as a foliage. C15 3-bay Beerstone arcade
with moulded piers (Pevsner's type 3) and capitals carved as foliage with shields.
There is a fourth arch between the chancel and north chapel which is smaller but
similar to the main arcade although it is panelled. On the south side of the
chancel there is another arch through to the vestry, a arch built in 1897 in the
same style as the arcade. The walls are plastered. Most of the floor is flagged and
includes some C17 and C18 graveslabs, particularly in the aisle. The sanctuary
floor is a pattern of coloured tiles.
The oak panelling around the sanctuary and the oak altar rail date from circa 1920.
The stalls, lectern, reading desk and pulpit are all oak, the benches are pine and
are simple with a minimum of Gothic enrichment. All are late C19 and early C20.
C15 Beerstone font with octagonal bowl carved with quatrefoil panels containing 4-
leaf motifs, plain coved based and panelled stem.
The only notable memorial is in the north aisle. It is a marble mural monument in
memory of John Hutchins (d. 1709) and his wife Katherine (d. 1707) and comprises a
rectangular plaque flanked by Corintnian pilasters with an entablature above
surmounted by an open pediment and heraldic cartouche and below the apron is a
cartouche with a carved skull. In the nave there are 2 lozenge-shaped hatchment
boards painted with the Sidmouth arms. C19 stained glass in the chancel windows and
eastern windows of the nave and aisle. The west window of the nave contains
medallions made up of fragments of ancient stained glass.
Source: Major M Leates A Guide to the Parisn Church of St Mary The Virgin,
Upottery, Devon