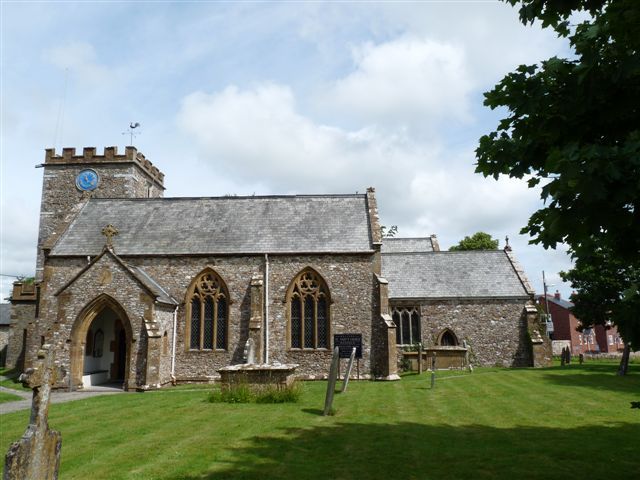 ST 11 SW HEMYOCK CORNHILL, Hemyock
5/48 Church of St Mary
5.4.66
- II*
Parish Church. Early Norman tower; C15 alterations largely destroyed when the
church was partially rebuilt to designs by Richard Carver of Taunton; although
extensive, Carver's work respected certain intriguing peculiarities of the medieval
plan (see below). Random rubble flint, Ham Hill stone dressings; slate roofs.
Plan: West tower, south tower porch, nave, north and south aisles, south porch,
chancel, north-east chancel chapel and vestry, sanctuary. Carver virtually rebuilt
the entire body of the church. The tower and part of the ground plan were retained.
The tower has early Norman arches to the north, south and east. There is no
evidence of a west arch, although it may have been destroyed when the late C19 west
window was inserted. The north arch alone is visible externally. There is no
masonry joint between the west face of the tower and the adjoining south tower
porch, and the quoining of the south-west angle of the tower stops at the level of
the parapet of the porch. This suggests that it is a contemporary build. The
north-west angle has been disturbed by the addition of a buttress. Furthermore the
south wall of the tower porch is on the line of the old nave south wall, the present
south arcade, ie. the tower arch facing the nave and the chancel arch are off centre
to the present nave. The possibility of the west tower having once been a crossing
tower has been suggested, although the close proximity of a stream to the west, and
the lack of any evidence of a west tower arch present problems for this
interpretation. The puzzle is complicated further by the existence of a medieval
flight of stairs that runs from the tower porch to what is now a west nave gallery;
the point at which the stairs enter the nave west wall is between the line of the
present south arcade and the south impost of the Norman east tower arch. Where can
they have led originally? Possibly there was a screen intended to house relics (of.
the screen at Ottery St Mary at the west end of the Lady Chapel).
Exterior: Tower. 3 stages, battlemented. Blocked Norman arch to north. South
tower porch also battlemented (see above). 3-light late C19 Perpendicular window;
no west door. Lancets to second stage; 2-light square-headed belfry openings, C15,
that to the south blocked by an inserted clock face. Weathervane south side : 3
bays including porch (with steeply pointed arch and diagonal buttresses), and 3-
light late C19 Decorated Ham Hill stone windows; chancel with C19 fenestration
except for the east window, which may be medieval, with uncusped intersecting
tracery. 4-bay north side, the easternmost north window possibly early C16, the
others C19.
Interior: 3-bay arcade (octagonal piers, double-chamfered arches); C19 arched
brace roof to nave; ceiled plaster ceiling to chancel. The wide arch between
chancel and north chancel chapel is wide, with an openwork trumeau, perhaps early
C16. Norman tower arches, unchamfered flat imposts, capitals with chamfer, the
abaci narrow but set deeply into the walls. Other medieval work includes a pointed
and cusped recess in the sanctuary east wall; piscina in south aisle; early C13
front, probably of Purbeck marble; a square bowl with round-headed blind arcade
supported on 4 detached shafts.
Good set of 1840s benches; also the gallery supported on slender posts, arcaded
with decorated frontal. Stone reredos.
Glass: An important 1840s east window with armorial shields, completely pre-
Ecclesiological. Chancel south probably Clayton and Bell.
Monuments: sanctuary north, plaque (to Rev. J Land, d. 1817) with a shelf above
supporting the scholar's books : opposite it a marble mural monument to various
members of the Rayner family.