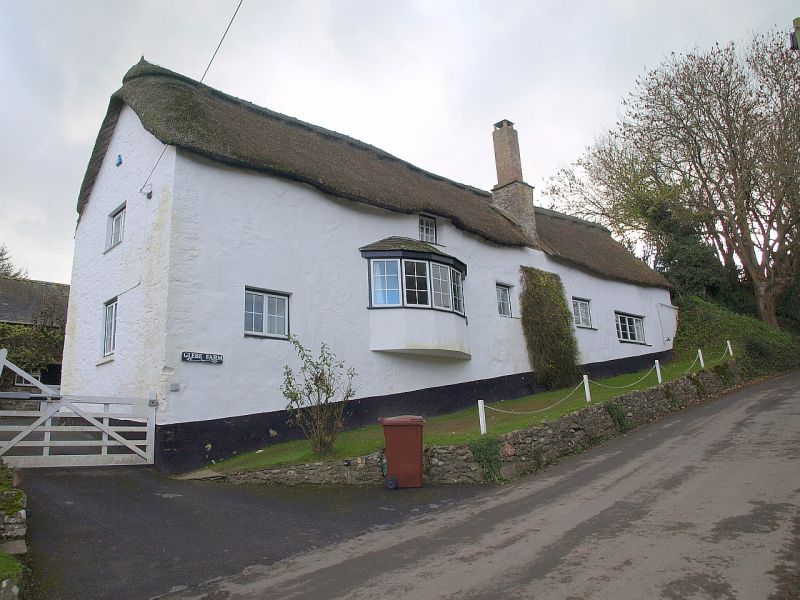 House formerly farmhouses. Circa early C16, altered in the C17 and extended in
the C18 and C20. Plastered rubble walls which may incorporate some cob. Thatched roof gable to right end, hipped to left end and wing. Large rendered rubble lateral stack with C20 brick shaft at front and rear, similar smaller stack at right-hand end, brick stack between main range and wing.
Plan: originally probably 3-room-and-through passage plan, with lower end to the
right although the passage has gone. Lower end and hall were originally open to
the roof, heated by a central hearth fire. The inner room appears always to have
been floored and heated by a fireplace on its rear wall. The front lateral stack
to the hall and end fireplace to the inner room were inserted in the C17 when thisend of the house became 2 storeys. In the C18 a barn was added at the left-hand end. This was converted in the C20 and extended by a wing at the front.
Exterior: 2 storeys. Asymmetrical 4-window front of late C20 P.V.C. casements
apart from an earlier C20 small-paned 3-light casement to the right on the Ist
floor. The 2 small bay windows on the ground floor to right of centre were
formerly porches. C20 stable-type door to left and right-hand ends. C20 wing
projecting from left-hand end has small-paned casements.
Interior: probably C16 fireplace in main left-hand rooms has a heavy chamfered
slate lintel resting on 3 tiers of curved stone corbels to the left of which the
top one has an integral lamp bracket. Ceiling beams replaced and other fireplaces altered. Smoke-blackened roof survives over at least right-hand end consisting of substantial straight principals with morticed apex, threaded purlins and collars halved and dovetailed in.