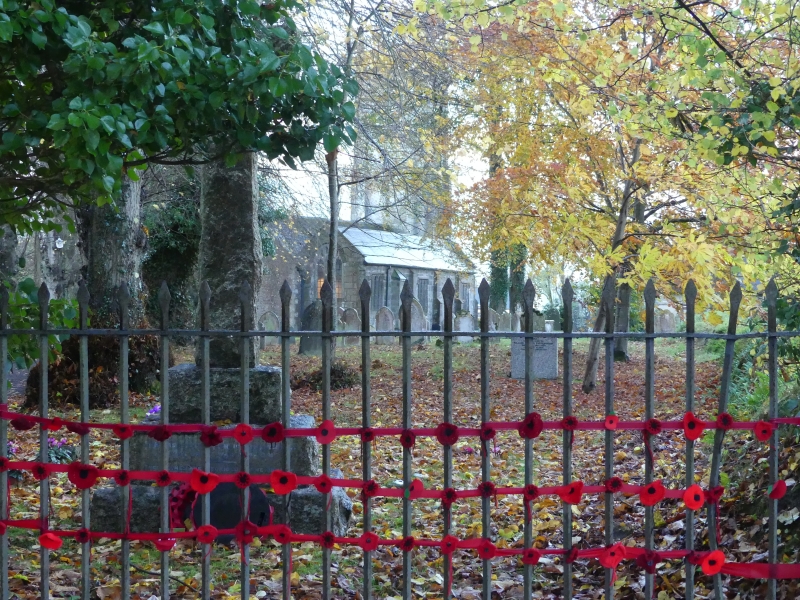 Small parish church. Norman origins. However present church is all C15, much of
it a major rebuild dated 1451, thoroughly renovated in the late C19. The tower and
north aisle are built of massive blocks of coursed granite ashlar, the nave and
chancel apparently much rebuilt in C19 with local stone rubble with granite ashlar
quoins; granite ashlar detail; slate roof.
Plan: nave with slightly narrower and lower chancel on a marginally different axis.
North aisle with east end chapel is not quite full length. West tower with internal
stair in north-west corner. South porch.
Exterior: tall landmark west tower of 3 stages with set back buttresses and
embattled parapet with corner pinnacles. It has 2-light belfry windows and on the
west side a round-headed doorway with moulded surround and a window above missing
its 2 mullions and tracery. South side of nave has a small gabled porch (probably
C19) with plain outer arch towards the left end, and to right a single square-headed
4-light window with round-headed lights, sunken spandrels and hoodmould; this one is
a C19 replacement. The chancel has 2 original similar 2-light windows with cusped
heads and there is a much restored 3-light window in the east end. Priests doorway
in south side is a tiny 2-centred arch. The north aisle has 3 similar much-restored
windows and another with pointed head with Perpendicular tracery at the east end.
It has corner diagonal buttresses and break between aisle and chapel marked by a
semi-hexagonal rood stair turret. A straight join suggests that the chapel is an
addition, probably of 1451.
Interior: south doorway has probably C19. It is a chamfered segemental-headed arch
but contains an ancient studded plank door with original ferramenta and oak lock
housing.
Best feature of the church are the roofs. All are C15. Nave has a ceiled wagon
roof with moulded purlins and ribs, carved oak bosses and a moulded wall plate
enriched with 4-leaf motifs. Aisle has a similar ceiled wagon roof except that here
the wall plates are carved with fruiting vines. The chancel wagon roof is now open.
Here the ribs and purlins are hollow-chamfered enriched with 4-leaf motifs and the
large oak bosses are naively but charmingly carved and feature the tinners hares,
the green man and sacred monograms. The wall plate is similarly carved with foliage
and vines. However the remarkable feature here is the Latin quotations carved on
the ribs and purlins. It records the names of Henry Le Maygne, vicar, "a native of
Normandy who caused me to be built AD 1451" and "wrote this with own hand" and
Robert of Rouen of Becedden, Prior of Cowick, near Exeter, and Richard Talbot, Lord
of Spreyton, who "gave their goods to my building".
Tall plain tower arch. Apart from the change in roof levels there is no break
between nave and chancel. The rood stair in the north aisle is intact and has
plain-granite doorways. 5-bay arcade of monolithic granite piers moulded (Pevsner's
type A) with plain caps to the arcade only. The 4th arch (from nave to chancel) is
much narrower than the rest and its arch is lop-sided. The 5th arch is wider and
lower than the rest. Either it was built like this to accommodate the lower chancel
roof or it is 2 phases. The walls are plastered and the nave and chancel includes
some C18 or early C19 fielded-panel wainscotting. Many of the window embrasures
have oak lintels. The floor is made up mostly of stone flags. The earliest are
small and square; they are the same size as encaustic tiles and some probably C15 or
C16 tiles are included amongst them. The floor also includes some graveslabs; most
are C17 and C18 but a couple in the north aisle maybe medieval. C15 piscina in
sanctuary.
The altar comprises an enormous slab of granite ashlar of indeterminate date resting
on an C20 oak table. The altar rail, stalls and low chancel screen which
incorporates the pulpit are built of oak in Gothic style. Plain pine lectern and
oak prayer desk. The benches are oak in C16 style with carved wreathed foliage
around the bench ends. Gothic style tower screen. All this furniture is late C19
or early C20. The remains of a richly carved oak doorway from the former rood
screen with delicate Perpendicular tracery is preserved at the back of the church.
Good late Norman granite font with octagonal bowl, each side carved with simple
geometric patterns and octagonal stem, each side carved with crude representations
nevertheless recognisable for instance as the Tree of Life, Mortality, Our lady
crowned etc. An apparently earlier crudely-finished circular font bowl in the north
aisle.
Monuments: the mural monuments are C18 and C19. The best is in the chancel and
dated 1763 in memory of Thomas Hoare (d. 1746) and his wife Agnes (d.1763). Another
good one in the north aisle in memory of John Cam of Fuidge (d. 1767). Painted
royal aims of George III on a board in the north aisle and a painted charity board
dated 1825 over the south doorway. East window has C19 glass.