A Grade I Listed Building in Buildwas, Shropshire 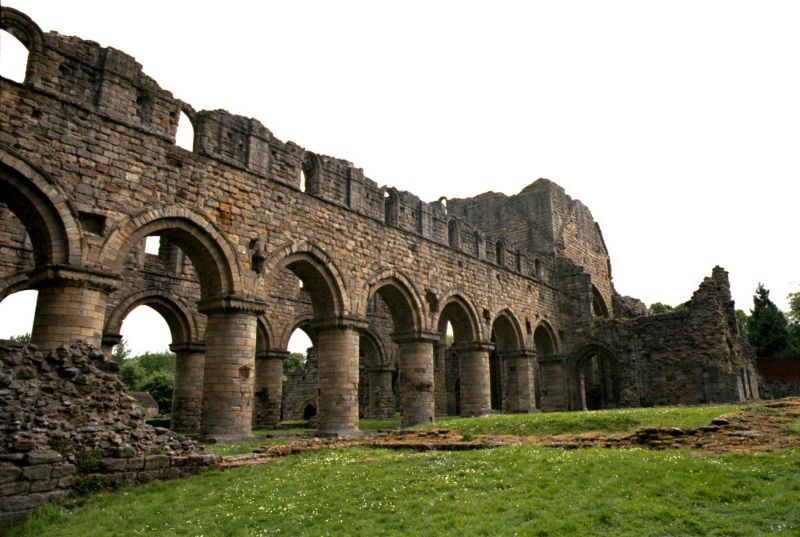 Abbey, remains of. Founded 1135 by Roger de Clinton, Bishop of Coventry
and Lichfield; present buildings mainly late C12 and completed by c.1200.
Regularly coursed limestone rubble, now roofless except for east range of
claustral buildings and transeptal chapels of church. Remains consist of
the church: nave, crossing tower, transepts and presbytery together with
the foundations of its aisles and south aisle chapel; and north claustral
buildings: east range comprising sacristy, chapter house and parlour,
plus the foundations of the lay brothers' quarters in the west range and
the footings of the cloister itself; the refectory lay on the north side
but its foundations are now in the grounds of Abbey House (q.v.). Church;
nave: circular piers with scalloped capitals supporting blunt-pointed
transitional 7-bay north and south arcades; clerestory above moulded
string course has round-headed windows (formerly with nook-shafts and
the remains of foliated capitals internally) linked by a continuous
hoodmould, shallow pilaster buttresses with the remains of a plain
corbel table on north side; austere west front has 2 tall round-arched
windows and pilaster buttressing; bluntly pointed arches to crossing,
those to east and west springing from decorated corbelled responds and
those to north and south from composite piers with waterleaf capitals;
presbytery in 2 bays, formerly rib-vaulted, the springing remaining at
wall tops; early C13 sedilia with dogtooth ornament on south, tall
lancet to east; 3-light east window said to be C18, replacing an early
C13 window of 6 lights (blocked openings still visible); transepts:
both have 2 pointed arches to east leading to small square-ended chapels,
which have the remains of groined vaulting and round-arched recesses in
their south walls; there is a crypt below the north transept and a door-
way in the south wall of the south transept formerly led to the monks'
cemetery, pointed arches also lead to aisles, of which (except for part
of a round-headed window at the west end of the south aisle) only
foundations survive; on the south are the foundations of the late C14
south aisle chapel, this contains a number of 013 and C14 grave slabs,
some embellished with floriated crosses. To north are the claustral
buildings; east range: at south corner a segmental-headed doorway
with round-arched hood leads to the groin-vaulted crypt beneath the
north transept (see above); this is followed to north by the sacristy,
approached through a round-arched doorway; vaulted in 2 bays, originally
ribbed, with a flight of 8 steps leading up from the east bay into the
north transept; next comes the chapter house, entered by a plain round-
headed doorway of 3 orders with nook-shafts (only one of which remains)
and flanked by round-headed windows of 2 orders with the remains of
decorated capitals; the building, which is below the level of the
cloister, is divided by 4 piers, 2 round and 2 octagonal, into 9 rib-
vaulted compartments; lit by 3 round-arched windows in east wall and
formerly by 2 others (now blocked) in the north and south walls of the
east bay; contains a good set of glazed floor tiles (?C14), some grave
slabs and various other architectural fragments; at end of range is
the parlour, entered through a doorway with segmental head under a
round-headed arch of 2 orders, formerly with nook-shafts; its interior
is rib-vaulted in 2 bays and doorways in the east wall and the east end
of the north wall formerly led to an undercroft: this is now represented
by the late C12 three-bay arcade, attached to the north-east corner of
the parlour, in the grounds of Abbey House (q.v.); the arcade
consists of 3 bluntly pointed arches aligned north-south with 2 circular
piers having multi-scalloped capitals and square abaci, walls projecting
at right-angles to west on north and south (latter still showing traces of
former vaulting) enclose a rectangular area: the function of the under-
croft is uncertain but it may have been associated with the abbey's
dormitory, a small round-headed window of which can be seen above the
south arch of the arcade, or with the refectory, the foundations of
which lie to the west: the roof-line of a former building projecting
to the east is visible above the south arch of the arcade. The west
range now comprises only the foundations of the cellar beneath the lay
brothers' quarters. Extensive earthworks to north-west include the
abbey's former fishponds. Buildwas Abbey is a Scheduled Ancient
Monument in guardianship (A.M. County No.2). B.o.E., Pp.88-90;
H.M.S.O. Guide (2nd Edn.1978); V.C.H. II (1973), Pp.50-9; The
Builder, Vol.79 (1900), Pp. 292-4