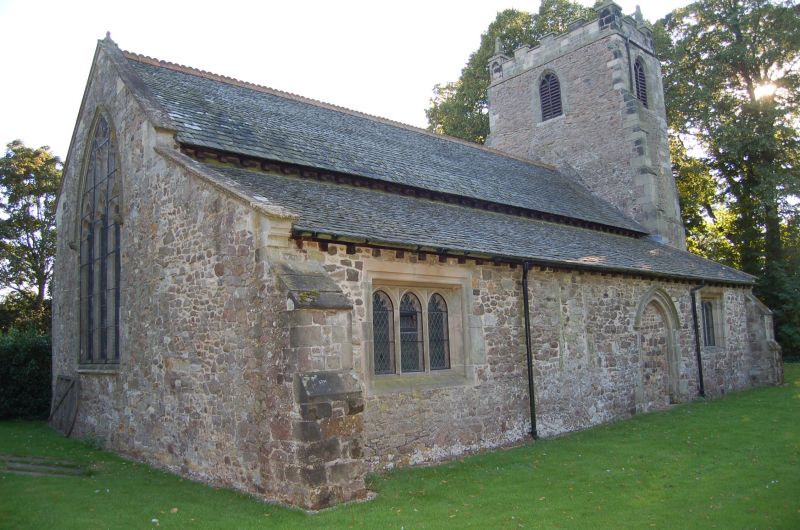 Church. Fabric dates back in part to C10 or C11 though most is early C14 and
it was extensively restored and altered in 1874. Granite rubble with
limestone dressings and Swithland slate roofs. West tower, nave with north
aisle and chancel in one. Tower is wider than it is long, since part of it
collapsed and was re-built more narrowly. Angle buttressed, plain chamfered
bell chamber lights with wood tracery. Embattled parapet with simple
finials. South wall largely of 1874, in filling a former south arcade of the
C14. The windows are in a Perpendicular style. South door and porch also
Victorian. 2 profiles of early roof structures visible against tower wall.
Chancel has 3 light window, Victorian in Decorated style. Renewed 3 light
Perpendicular window in north wall, blocked square headed opening and doorway
with hollow and roll moulded architrave. Inside, the west tower arch is early
C13: narrow and double chamfered, the inner thick chamfer is carried on heavy
corbel heads. Blocked south arcade of 3 bays is late C13 or early C14, double
chamfered with stops and octagonal shafts and abaci. The north arcade however
is C12: low round shafts have projecting abaci and stepped segmental arches.
The eastern bay cuts the remains of an earlier round headed window with
voussoirs, the sole visible evidence for the early dating of the church. Nave
roof is largely Victorian but using medieval tie beams. Eastern-most bay
alongside the chancel is a later construction, probably C14, with double
chamfered arch and semi-octagonal respond. Possible C17 communion table and
C18 altar rails. Various C15 embossed patterned tiles in the north aisle.
Glass in the style of Kempe in east window, 1896 depicting Saints Bartholomew
and Philip with Christ. Monuments in the north aisle: on the east wall a
memorial stone in a broken pediment, black, yellow and white marble, with urn
commemorates Charles Skrymsher Boothby d.l774, the panegyric dedicated by his
widow Anne, who is also interred below. Against the north wall, Henry Fawnt
Esq., and Elizabeth who was his third wife. The two recumbent effigies lie on
a tomb chest beneath an aedicule where red faced putti pull back curtains.
The effigies are loosely shrouded. The carving is crude but exuberant and
painted. Inscription behind the figures records the children of all Henry's
marriages with their deaths, marriages and issue. Font is probably C12 or
C13. Round basin on central shaft with four squared outer legs.