A Grade I Listed Building in Leicester, Leicestershire 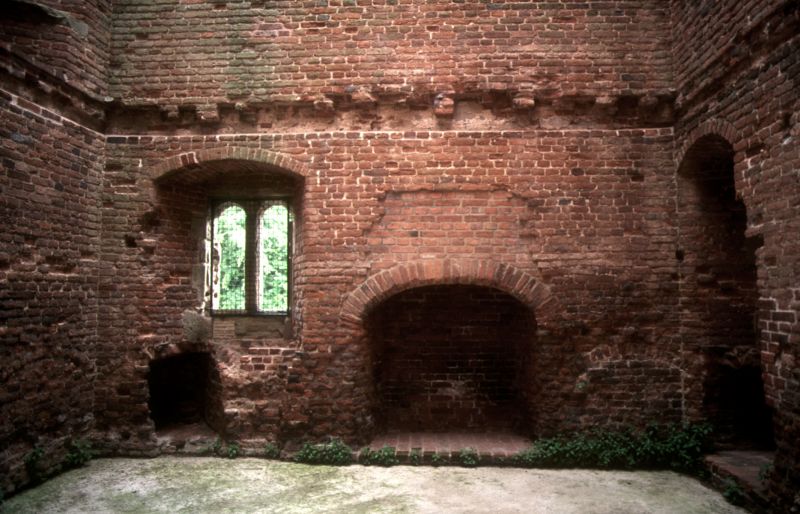 Ruins of castle. Begun 1480 for William, Lord Hastings, who was beheaded June
1483 leaving most of the construction incomplete. Narrow red brick with diapering
and figured ornament in blue headers; some stone dressings. No roofs. Rectangular courtyard plan with towers projecting at corners and centres of each side.
Surrounded by a moat. Only gatehouse at centre of north west side and west tower
ever neared completion; remainder survives only in plan marked by foundations
and low base walls. Foundations of earlier manor house are visible in courtyard.
Gatehouse is of 2 storeys, with chambers flanking central entrance, large chamber
above, and octagonal corner towers. To either side are the beginnings of spur
walls of side ranges. Chamfered stone plinth with stone gunports above; chamfered
stone string at first floor level. Large central gateway of moulded stone with
4-centred arch and ashlar panel above, all recessed behind slot for portcullis.
Remainder of lower storey is blind on north front. Upper storey has 2 stone
mullion and transom windows to main chamber each window with pair of arched lights
in rectangular moulded surround. Central blind rectangular niche in carved stone
surround, flanked by initials WH in blue header brick. Upper chambers of towers
have single lights with arched heads and moulded surrounds. Walls of towers
carry blue header motifs including a sleeve, a ship and a man. Courtyard front
of gatehouse has 2-light stone windows flanking stone archway, and fragments
of upper windows. Towers on this side have doorways with 4-centred stone arch-
ways to spiral staircases lit by single lights with depressed arches and double
chamfered brick surrounds. Staircases have fine helical brick vaults. Lower
chambers have brick barrel vaults, with vaulted garderobes in north towers.
Inner doorways have depressed arches of chamfered brick. Similar surrounds to
fireplaces. Upper part of north east tower converted to dovecote. West tower
is 3 storeys high with taller square turret projections on north east and south
east sides, the former with spiral staircase. Plinth, gunports and strings as
on gatehouse; also battlements. Stone windows with arched lights, each chamber
with a 2-light window to either north west or south west, and single lights to
remaining sides.