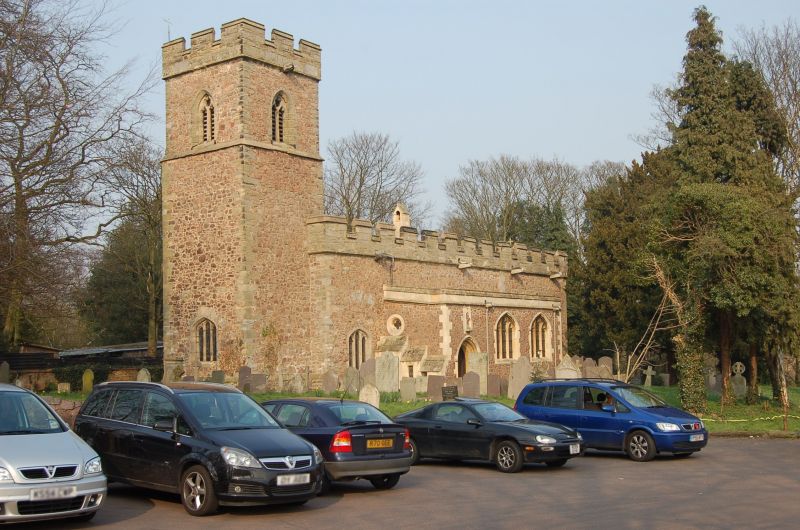 II
Parish Church. Basically C13 and C14 but much restored: the south aisle was
added in 1904. Mostly of granite rubble with ashlar dressing. West tower, nave
with one aisle, and chancel. Late C13 buttressed west tower of 2 stages with
West window with 3 cusped lights, and paired foiled light to bell chamber.
Embattled parapet with gargoyles. South aisle of 1904, in early decorated style.
Its west wall has 3 stepped buttresses containing a door and two windows. Niche
with statue over south door whose moulded arch springs from chamfer rather
than a shaft. 2 foiled 3-light windows with corbel heads. Plain parapet with
gargoyles. South west window of nave consists of 3 rounded- headed lights with
high relieving arch and is early perpendicular. High chancel is slightly wider
than the nave and built of fine rubble on a plinth. In its south side is a
low side window and late Decorated window of 3 foiled lights. The east window
is a C19 restoration of an early perpendicular 5-light window with very plain
tracery. The four north windows are Victorian renewals with stilted hoodmoulds
and corbel heads over 3-light tracery.

Interior has double chamfered arch to west tower, and nave arcade of 3 bays
to south aisle. The aisle itself is of 1904, but the arcade is C14 the former
aisle demolished 1796, short octagonal columns with heavy abaci support double
chamfered arches with corbel heads to outer hoodmould. Some traces of painting
on the piers. Narrow round arched north doorway. North windows set in shafted
recesses. No chancel arch. Nave and chancel roofed as one, a C19 cambered trussed
roof, the chancel emphasized by additional struts and bosses. Various late
C17 and C18 wall memorials to members of the Palmer family in the chancel,
and 2 C19 decorated slates bearing the commandments etc. above the altar. In
the chancel floor a large brass of 1393, commemorating Thomas and Katherine
Walsh, and recording that they "in yer tyme made the Kirke of Anlep". Figure
of a knight and lady, in a border containing the inscription and the emblems
of the evangelists. Stained glass in west and east windows of 1904; and some
older armorial glass in north windows.