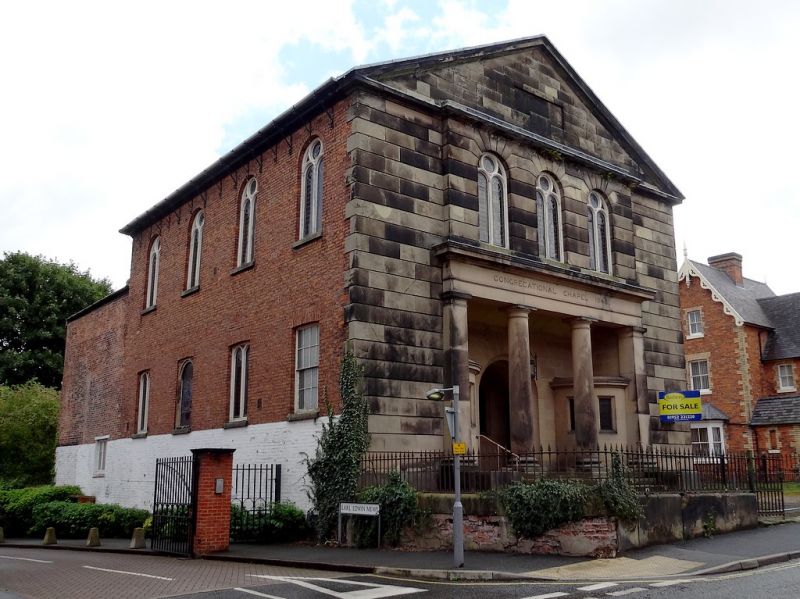 MATERIALS: Red brick with an ashlar façade of sandstone, with chamfered rustication, and a gabled slate roof of shallow pitch.

PLAN: The chapel is oriented with its dais at the north-east end and entrance front facing south-west. It has a swept gallery and a separate organ gallery behind the dais. The church hall and first-floor Sunday school are attached to the eastern corner.

EXTERIOR: The entrance front has a central three-bay projection, with cornice breaking forward over. First-floor round-arched windows with Venetian tracery (altered circa 1900). Ground-floor three-bay Tuscan portico in antis with full entablature. Frieze inscribed: 'CONGREGATIONAL CHAPEL 1846'. Four stone steps up to entrance. Interior of porch (altered circa 1900) with central hollow-chamfered round archway flanked by quadrant blocks with moulded cornices, blocking courses and pairs of leaded windows with moulded reveals. There is a three-light segmental-headed window to centre behind the arch with moulded mullions and reveals, and pairs of four-panelled doors in returns to left and right with moulded cornices above. The returns have a moulded stone eaves cornice and wrought-iron eaves brackets. There are four bays with two tiers of two-light windows, those above being round-arched with Venetian tracery. Church hall and Sunday school are of two storeys. The side elevation has three bays with glazing bar sashes of 16-panes to the ground floor with stone cills and lintels, and round-arched 12-paned sashes to the first-floor. There is a gabled porch in the re-entrant angle. The vestry rooms adjoin to the north-west.

INTERIOR: Largely unaltered. Moulded cornices. Ceiling with two recessed rectangular panels. Swept gallery to three sides on cast-iron columns, with a raised and fielded panelled front with clock in centre and with raked seating and box pews with ramped sides. Large round arch to rear with nook shafts, and organ to centre. Flanking round-arched recesses. Doors with reeded architraves. Box pews to the body of the church. Large wooden pulpit of 1915. C18 brass memorial tablets, taken from the Presbyterian Chapel in Dodington (q.v.) when they were discovered there in 1896. Mr. John David Jones, father of the famous composer Sir Edward German (1862-1936), was the honorary organist and choirmaster at this church.

HISTORY: The United Reform Church split from the Presbyterian Congregation, who had premises on the other side of Dodington, in 1797. The following year they converted a small currier's shop to serve as their chapel. This was considerably enlarged and fitted out as a chapel in 1813 and the vestry was enlarged in 1815 and a schoolroom was added at first floor level. A new school hall was added to the south-east and a new (dated) façade, both in 1846. Further alterations were made around 1900 when the porchway was re-ordered and the original arched sash windows were replaced by the present "Venetian" tracery. In 1913 the centenary of the building was marked and in 1915 a new pulpit and choir stalls were fitted, together with the new timber screen behind the dais.

REASONS FOR DESIGNATION DECISION: The United Reformed Church, adjoining church hall and Sunday school should not be upgraded on account of the following principal reasons:
* The association of the building with the dissenters, Philip and Matthew Henry and the composer Edward German is not sufficiently close or long-term to be a factor to raise the interest of the building
* Although it is possible that the building contains some material and fittings which date to before 1813, this can not be confirmed with any certainty and, even if firmly established, is unlikely to alter the level of grading
* The present level of designation at Grade II is appropriate
* A good example of a Nonconformist chapel with associated Sunday School
* A good range of internal fittings of various dates
* A complete range of box pews