Church of St Augustine of Canterbury 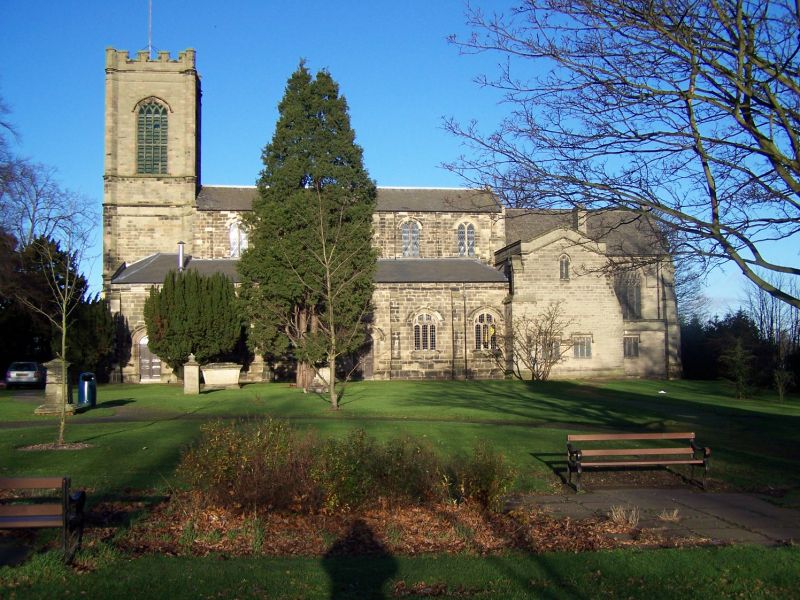 GV II*
Church. 1822-23. Attributed to H J Underwood of Oxford in a loosely Perpendicular Gothic style. E end additions in Perpendicular style by Frank Pearson c.1904; fittings of the late C19 and early C20. There is evidence of an intention to rebuild the nave. Ashlar masonry with slate roofs; cast iron roof trusses to the nave. Plan of 5-bay clerestoried nave, galleries on 3 sides; lean-to N and S aisles with gallery stairs at the W ends and a W tower/porch. The E end consists of the chancel with a 2- and single-storey SE organ chamber-cum-vestry roofed at right angles to the chancel. N chancel chapel with a gabled W/E roof.

Exterior: The 1820s and 1904 phases are contrasting, with the later phase carefully balancing the earlier. The 1820s phase has windows with flat-faced, hollow-moulded, uncusped tracery. Very tall 2-stage W tower with polygonal buttresses and an embattled parapet. The tower has a Tudor arched W doorway with an 1820s 2-leaf door and large 4-light Tudor-arched window above with intersecting tracery. The belfry windows are equally large, Tudor arched and traceried. The lean-to aisles have plain parapets and set-back buttresses and 3-light 1820s windows with 2-light Y-traceried windows to the clerestory. The S side has Tudor-arched doorways in the W and E bays with 1820s doors. The W ends of the aisles are more or less flush with the W wall of the tower and curve inwards to it. Frank Pearson's eastern arm is commandingly tall from the S and substantial and picturesque relative to the nave and tower. The chancel is very tall with angle buttresses with gables, a 5-light Perpendicular style E window with a crocketted ogee hoodmould and a 4-light window on the S side. The N chancel chapel is buttressed with high-set Perpendicular style traceried windows. The chapel has a NW turret with a pyramidal stone slate roof. The organ chamber-cum-vestry block on SE side is gabled to the S with a parapet. Square-headed ground floor windows with cusped lights; a 2-light traceried window in the gable of the 2-storey portion, which has a lateral E side stack.

Interior: 1904 chancel arch on responds with clustered shafts. 1904 arch springers indicate unexecuted plans to rebuild the nave. Blind Gothick arch to the tower above the gallery. Arcades with tall quatrefoil-section piers and Tudor arches. Shallow-pitched nave roof divided into panels by moulded members, the panels painted, with slender cast iron roof trusses with vertical struts in the spandrels with the arched braces. The galleries have timber frontals decorated with relief Gothic arched motifs. The W gallery is supported on two cast iron columns. Canted chancel roof divided into panels by moulded ribs. Triple arcade of depressed arches on quatrefoil columns between the chancel and NE chapel which has a depressed arched roof also divided into panels. Sanctuary reredos carved in Italy and given in 1930. The sanctuary wood panelling incorporating timber sedilia is also probably c.1930. Alabaster font given to the church in 1874 has a round bowl with a carved cornice on carved alabaster stem with green marble shafts and a moulded alabaster base. 1907 polygonal timber pulpit on an octagonal timber stem with timber shafts. The pulpit has pierced traceried sides and a carving of St Augustine. Choir stalls and frontals with elaborately-carved ends decorated with blind tracery, the seats with poppyhead finials. Nave benches with square-headed ends with recessed panels. The Eastern arm of the church has a set of windows by Kempe.

Historical Note: Building materials from the old church were sold in the 1820s to fund the new building. The cost of the nave and tower was £6,501.

Extra Information: Both Pevsner and the old list description attribute the 1820s design to H J Underwood of Oxford. Rugeley is not in Colvin's list of Underwood's works and is somewhat earlier than any of his buildings therein listed. Underwood exhibited at the Academy in 1822 and 1823 and was sent to Oxford in 1830 by Sir Robert Smirke, in whose office he worked. Colvin describes him as making a 'modest reputation' as a Gothic Revivalist.

St Augustine's is a large town church in a cleared churchyard. It is sited on the opposite side of the road to the ruined medieval parish church and adjacent to the Trent and Merseyside canal. The 1822-3 nave, aisles and tower are historically important as an early, ambitious and large-scale example of Gothic Revival, with its galleries intact. The 1904 eastern arm by Frank Pearson both contrasts with and carefully balances the earlier work.