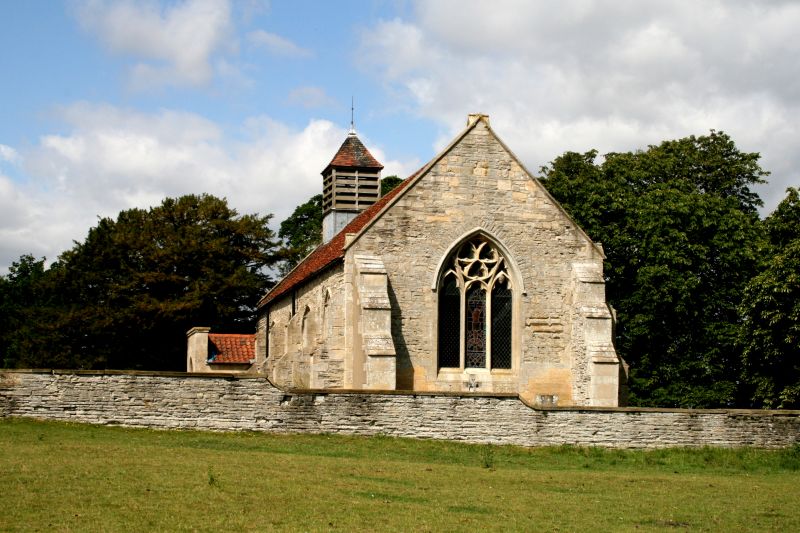 Parish Church, disused. C12, C14, C15, reduced in size, probably in C18,
partly rebuilt c.1832, turret erected 1890. Coursed rubble with ashlar
dressings. Tiled roof with stone coped gables, that to the east being
moulded either side of the ridge and at the base. The turret has an ashlar
and lead base with timber supporting the roof and damaged weather vane. Nave
and chancel under single roof, west turret with pyramidal roof, south porch.
The church is set on a shallow plinth and is buttressed. The west wall has
a 2-light window with cusping and triangular head. To the north of the south
buttress is a small ashlar, brick and tile lean-to with wooden door. To the
west of the north wall are two 3-light windows with cusping, triangular heads
and hood moulds over. The east wall has an arched 3 light window with
reticulated tracery, having a centre circle under the apex which contains 3
trefoils. There is a hood mould with gauged coursed rubble over. The south
wall has 4 arched windows. The eastern most one has 3 lights with flowing
tracery and a hood mould. The off-centre east window has 4 lights with panel
tracery, cusping and hood mould. The off-centre west has 3 lights with flowing
tracery, quatrefoils and hood mould. The western most window has 3 lights
with cusping and is under a triangular arch with hood mould. The ashlar,
coursed rubble and pantile porch has a stone coped parapet hiding the roof
line. Over the entrance arch is a stone dated 1830. The interior porch
doorway has a chamfered arch with hood mould over. The interior has
to the east of the door a C14 piscina with cusped arch and crocketed hood
mould with a single remaining label stop to the east and carved head as a finial.
The west wall has a single corbel flanked by single larger corbels. Above
is a small triangular headed opening. There is a C14 octagonal font. To
the south wall are 2 C14 monuments, both partly hidden by the wall and raised
floor. That to the east is decorated along its sides with lozenges containing
shields and has a single column at each corner supporting the top. The
second monument has quatrefoils and shields decorating the sides. There is an
C18 kingpost roof, with some remains of C18 panelling to the wall.