A Grade I Listed Building in Wigmore, County of Herefordshire 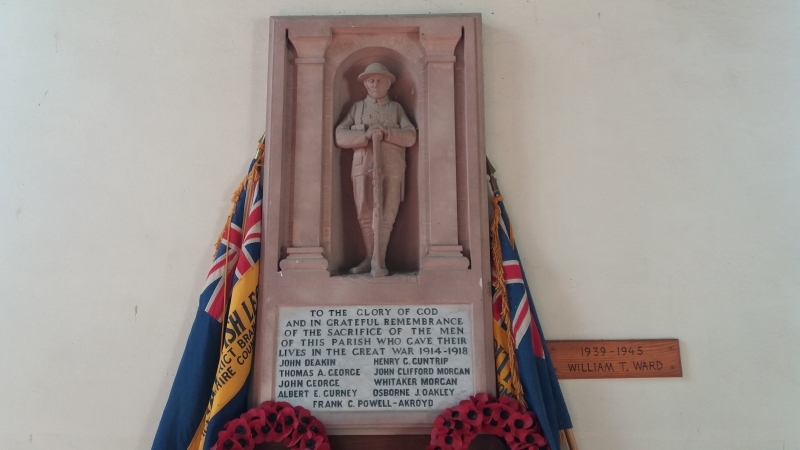 West tower: mid-C14 and of four stages, undivided externally
with a moulded plinth. The lower stage has a pair of cusped ogee-arched
lights in the west elevation. The second stage has a cusped ogee-arched
light on all sides except the east side which has a loophole into the nave.
The third stage has a narrow square-headed light on three sides and on east
doorway into the nave roof. The belfry stage has a cusped pointed louvred
bell chamber opening on each side and above is an embattled parapet partly
concealing a shallow pyramidal roof with ball finial and weathervane. The
tower stairs are situated in the north-east corner and are lit by four loop-
holes. Nave: C11; north wall faced with original herringbone masonry
(probably entirely of this type of construction once) and in it is a 2-light
C15 window with a square head. The east bay of the original two-bay C15
north aisle was demolished in the C19, but the outline of the archway into
this bay can be seen externally and also the piscina. The north chapel
was created out of the surviving west bay of the north aisle. It has a
lean-to roof, a reset 3-light C14 window with a square head (only the jambs
are original). The east wall is C19. The south aisle was added in the
early C14 and has a separate gabled roof and angle buttresses with offsets
(largely rebuilt) at the corners. There are two large restored 3-light
windows with hoodmoulds in the south wall (the western one of which has
head stops to its hoodmould). There is a similar window at the east end
and a 2-light window at the west end. The south porch is mid-c19, gabled
and timber-framed on a tall rubble base. It has scalloped bargeboards,
a pointed moulded archway, with quatrefoil reliefs in the spandrels,
flanked by cusped pointed openings with transoms and also relief decoration
in their spandrels. The side elevations have arch-braced wall-plates beneath
which is a brattished beam above four openings with octagonal mullions. The
south doorway has heavy quarter-round moulded jambs and a two-centred head.
At the east gable end of the nave are two 2-light square-headed C15 windows
set either side of the chancel roof. Chancel: rebuilt and lengthened in
the early C14 -and apparently narrower than its predecessor. There are
diagonal buttresses with offsets at the east end and the C14 east window is
of three lights with reticulated tracery In the north wall are two pairs
of C14 cusped lights with quatrefoils above. The south wall has been partly
refaced and has two 2-light windows and, between them, a C14 doorway with
moulded jambs and pointed head.

INTERIOR: C15 north arcade of two bays
(eastern archway is blocked) with pointed arches of two moulded orders and
a central octagonal column with a C19 embattled capital. The early C14
south arcade is of two bays with pointed arches of two orders springing
from an octagonal column and semi-octagonal responds. East of the arcade
is a C15 or C16 four-centred opening (possibly formed from rood loft stairs).
Above, at rood loft level is a C14 recess with a cusped head. West of the
arcade is an C11 round-headed light. The restored early C14 chancel arch
is two-centred and of three orders, the inner mould and the outer two
hollow-chamfered, and has semi-octagonal responds. The two-centred tower
arch is of three continuous orders. To the north of the tower arch is a
C15 doorway with chamfered jambs and two-centred head.
The nave has an
early C15 hammer-beam roof with arch-braced collars forming segmental
arches and with cusped wind braces forming a row of lozenge-shaped panels.
The south aisle has a C14 roof with arch-braced collar trusses with V-struts
above the collar and having alternate cusped arch-braced tie beams. Beneath
the north wall plate is a row of stone corbels. The chancel roof is C19.
In the east jamb of the south-east chancel window is a C14 piscina and a
sunk panel with a cusped head. There is also a C19 double sedilia beneath
the south-east window with a central C14 stone arm. C15 choir stalls are
returned at west end (a C17 arrangement) and have blind, cusped ogee-arched
panels and buttressed standards with poppyhead finials. C14 piscina with
cusped head in south aisle, also C14 stoup to east of south doorway. Medieval
octagonal stone font with hollowed under-edge, octagonal stem and base in
south aisle. C16 decagonal timber pulpit with seven linenfold panelled
sides and central octagonal post with radiating struts. Early C17 altar table
with turned legs at east end of nave. In the south aisle is a carved cherub
head, a stone mortar and part of an octagonal stone bowl, all medieval. There
are two hatchments on the west wall of the nave and, within the tower, is a
C17 panelled cupboard, a C17 stair door and a medieval altar slab with incised
crosses re-used as the west window sill. Memorials: in the chancel is a floor
slab to Alexander Clogie, vicar, died 1698. The north chapel has numerous
memorials to the Davies and Kevill Davies families of Croft Castle and Wigmore
Hall dating from 1738-1832. There is also a mid-C18 Davies memorial in the
tower and several C19 memorials in the nave. Glass: in the south aisle east
window are fragments of C14 glass. Also some mid C19 chancel glass by D Evans
of Shrewsbury.