A Grade I Listed Building in Thruxton, County of Herefordshire 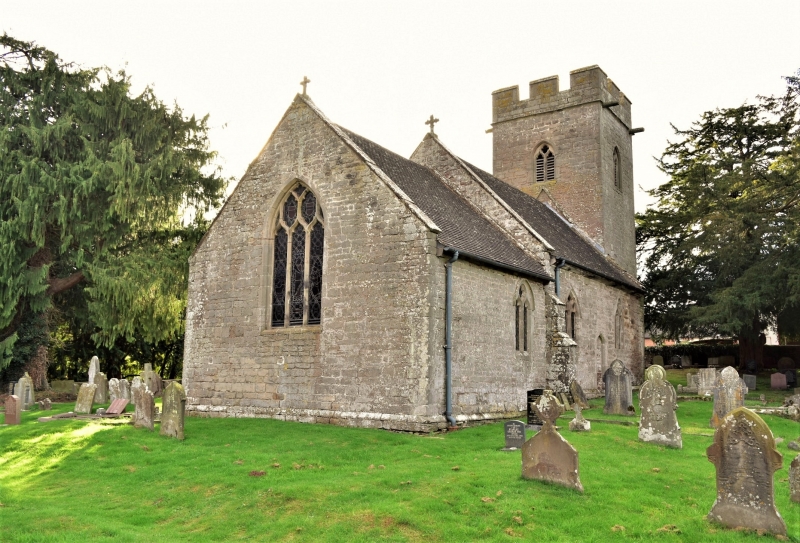 Tower is embattled
with three stages undivided externally; top stage has two trefoiled ogee
lights with quatrefoil tracery under a 2-centred head to each cardinal
face; west wall has a square-headed loop to second stage and a narrower
one to the ground stage. Nave has 2-light trefoiled ogee window with
quatrefoil tracery and no label to west end of north wall to the east of
which is a 4-centred C15 blocked north doorway with chamfered jambs and
another trefoiled 2-light window without ogees under a 2-centred label;
the west window of the south side is similar to the one opposite, beyond
the porch the east window is a 2-light trefoiled ogee window with inverted
ogee tracery under a square head. Chancel has traceried trefoiled and ogeed
3-light window with a 2-centred head, separating the north and south walls
from the nave is one buttress with offsets to each side; the north window
has two lights, each trefoiled and ogeed with a quatrefoil above, 2-centred
head on label; south window is chamfered with a 2-centred head and two recessed
trefoiled and ogeed lights under quatrefoil tracery; to the west of the window
is a blocked priests' door with chamfered jambs and a 4-centred head. Chamfered
plinth to nave, chancel and south wall of tower; east verges of nave and chancel
each carry crosses. Porch is partly restored, sandstone plinth, two bays,
jowled corner posts (the front ones having scotches) carry cambered and chamfered
ties supported by arch-braces, scalloped bargeboards formed by two subsidiary
cusps to each lobe of main trefoil; trefoiled wind-braces to each bay beneath
single purlins; restored wall-plates and five-bay side-panels open at the top.
South doorway has 2-centred head and chamfered jambs running down to pyramidical
stops above chamfered plinth; restored C17 studded ledged door with strap hinges,
circular escutcheon plate and handle.

INTERIOR: rear arch of south doorway has
segmental head; C14 wagon roofs, that of nave with straight braces supporting
collars and scissor-struts continuing the line of the braces above the collars;
that of chancel without scissor-struts but with curved braces to collars;
chancel has two re-tooled corbelled brackets, one to each side of east wall
but at different levels; east window has stained glass depicting The Good
'Shepherd with "FEED MY LAMBS/ IN MEMORY OF: ARCHDEACON: HENRY WETHERELL/
BY BEQUEST OF: HIS WIDOW: MDCCCLXV"; C14 stained glass in south window, mainly
fragments but tracery light of Crucifixion has green cross, brown loin cloth,
vine-leaf ground and margin with red beads; late C19 or early C20 harmonium
labelled "Chancel Organ"; chancel arch is 2-centred and has continuous double
chamfers to east and west. Nave has font in square to octagonal chamfered base
with inscription: "BAPTISMUS EST ABLVTIO PECCATORUM", octagonal stem with
moulded necking supporting octagonal bowl with curved bottom bearing another
inscription: "THIS: FONT: WAS: MADE: MARC (sic): THE: 16TH: 1677";
consecration cross set in round panel in soffit of top of blocked north doorway;
mutilated stoup to east of south doorway; coffin lid with incised cross
re-used as lintol of east window in south wall of nave; mid-C19 stove near
south door with raised lettering: "SMITH & WELLSTOOD LTD/ COLUMBIAN/ STOVE WORKS/
BONNY BRIDGE/ SCOTLAND". Tower has east doorway with 2-centred head and
chamfered jambs running down to pyramidal stops, above is a recess or
blocked opening with a flatter 2-centred head with chamfers dying into the
jambs; under the tower are several wall monuments viz: Richard Davies, died
1797; Chrysogen Vaughan, died 1789; Hugh Russell, died 1722; Aristarcus
Merrick, died 1794 by J Prichd; early C19 Benefactions board; C17 communion
table with moulded rails and stretchers and chamfered legs. Two drawings
in nave of the church before restoration, the first near the south door,
"Thruxton Church Interior/ July 26 1865/ copied from a sketch done on the
last day of its/ existence by the Rev E Jacson" shows early C18 communion
rails to altar and two wall monuments, one recognisably now in tower, on
east wall of chancel, box pews, two-decker pulpit and stove (see above) in
centre of nave with chimney pipe crossing the nave and going through the head
of the tracery of the east Window of the south side of the nave; the second
near the tower doorway has a similar inscription but shows the west end of
the church with the former west gallery and a large detail of one of its cast
iron supporting pillars. The Rev Jacson did not long survive the restoration
of the church, his brass memorial plaque on the north wall of the nave reads:
TO THE MEMORY OF
EDWARD JACSON
RECTOR OF THE PARISHES OF
THRUXTON AND KINGSTONE 1858 - 70
DIED AT THRUXTON 18TH JULY 1870
AGED 43

This modest medieval church is graded I for its generally unrestored
appearance and surviving medieval roofs to nave and chancel.