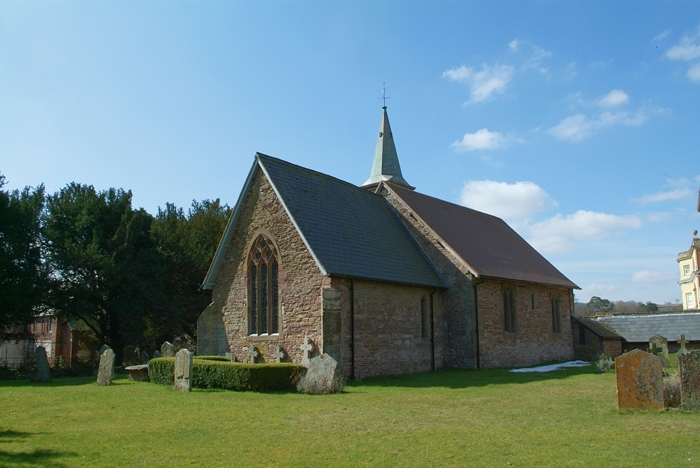 Nave: C12, west end has C14 chamfered doorway and above it is a C19 cusped lancet. The timber-framed gabled porch was built in 1894 and has arch-braced tie-beam inner and outer roof trusses and arch-braced wall-plates. The date is carved on the apex of the outer truss. The north elevation has a central original round-headed light flanked by two-light windows with square heads and hoodmoulds; the easternmost window is probably early C14 whilst the westernmost is C19. The bell turret is probably circa 1700. It is square in plan with pairs of pointed louvred bell chamber openings. The copper-clad, splay-footed spire has a finial and weathervane.

South chapel: early C14 with unusually thick walls for its date. There are angled corner buttresses with offsets and also a buttress with offsets at the centre of the south elevation. The east end window is large and of three lights with reticulated tracery. The south side elevation has two two-light windows with hoodmoulds and at the west end is a chamfered doorway and above it an ashlar clockface with a moulded rim.

Interior: pointed chamfered chancel arch was rebuilt in C19. The wide, acutely pointed, early C14 arch from the nave into the chapel is of two chamfered orders; it has been blocked and a small doorway inserted. The roofs throughout are of the ashlared collar rafter type and of C14 date. At the west end of the nave is a tie-beam truss, the tie-beam of which is moulded and supported on carved brackets. At the north-east end of the chancel some small deep rectangular holes have been pierced in the wall, the purpose of which is unknown. Also in the chancel is a square aumbry and a plain piscina with a three-sided head.

The altar table has turned legs and dates from the C17 and the altar rails have turned balusters and are circa 1750. The plain, circular font is C12 on a modern base and there is a C19 stone pulpit. Both the nave and chancel have dados made up of C17 and C18 panelling and the chapel also has some C18 panelling attached to its south wall. The thick oak pews are of C16 origin with C18 panelled ends. In the chapel there is an oak bier dated 1682 with the initials "I S", a C15 helmet and a parish chest of possible C14 date carved out of a single log. On the plastered jambs of the south-west window are remains of C14 wall paintings.

Memorials: the chancel has two marble monuments flanked by columns with broken segmental pediments and coats of arms above. The easternmost one has spiral columns and commemorates Catherine Pytts, died 1702, and the westernmost commemorates Edward Pytts, died 1672. There are also other memorials to members of the Pytts family, including a sarcophagus relief to Johnathan Pytts, died 1807. On the south wall of the chapel is a tablet to Hugh Thomas, died 1693, and there is also a floor slab to Elizabeth Brockwale, died 1618, at the east end of the chapel.