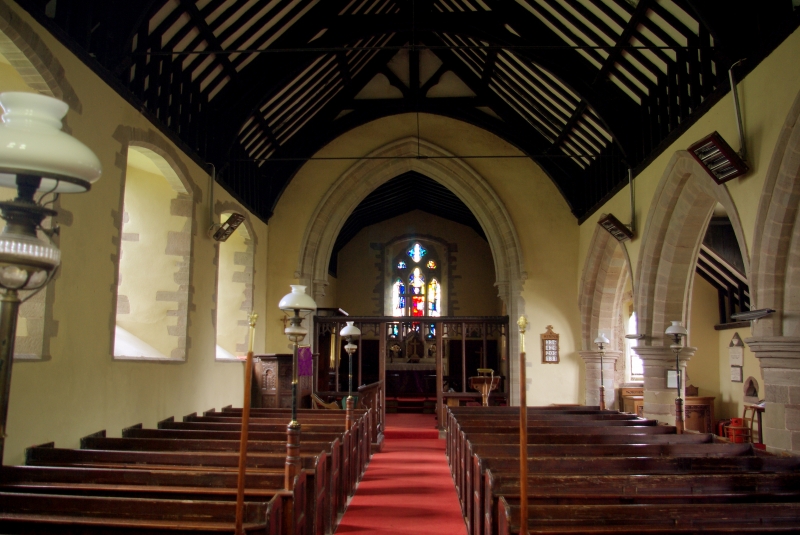 Tower was added in 1854 and replaces a former west bell-turret. It is of two stages with a chamfered plinth and intermediate string, and has angle corner buttresses with offsets and small subsidiary buttresses set between them. The lower stage has a pair of cusped lancets in the west elevation and there is a pointed-lobed quatrefoil window immediately below the string in both east and west elevations. The main entrance in the south elevation has a chamfered pointed doorway with a hoodmould and head stops and above there is a clockface set in a cusped square niche. The belfry stage has pointed bell-chamber openings of two louvred lights and above there is a broach spire with a finial and weathervane.

Nave: the thickness of the north wall indicates that it is probably C12. The south aisle was added circa 1260 and the west wall was rebuilt in 1854. The C19 west window is composed of a pair of cusped lancets with a trefoil between the arched heads. The north elevation has a buttress with offsets at the west end and four pairs of C19 cusped lancets with a continuous sill band.

The south aisle has a lean-to catslide roof. At the eastern end of the south wall is a tall C13 half-dormer window with a gable-end parapet, a two-light pointed window and above, within the gable, is a small ogee-arched cusped niche. The wall west of the dormer has been refaced and has two pairs of cusped C19 lancets. There is a C19 cusped lancet at the east end.

The chancel dates from the early C13 but the east end wall was rebuilt in the C19. At the east end are three stepped cusped lancets with two trefoil windows and a central quatrefoil window above. To the left of the window is a large buttress with offsets. The side elevations have buttresses at their eastern end. The south elevation has two original lancet windows and, between them, a C19 pointed doorway with a hoodmould and head stops. East of the doorway is the remains of a wall memorial with two corbels supporting a moulded base.The north vestry is C19 and has a lean-to roof, a lancet in the north end and the east side. There is an octagonal ashlar chimney to the east of the vestry.

Interior: south arcade has four pointed arches of two chamfered orders enclosed by a hoodmould on large circular columns and responds. The three easternmost bays are of circa 1260, the rest is C19. The tower base serves as a porch and C19 pointed archways lead into the south aisle and the nave. The pointed chancel arch is also C19. In the chancel a pointed opening with a three-light timber traceried window and a cusped square-headed doorway lead into the vestry. The nave has a C19 arch-braced and cusped king-post roof. The chancel has a C19 scissor-trussed roof. In the chancel is a C19 marble reredos with cusped niches containing angel figure reliefs, a pointed piscina and a traceried, arcaded Perpendicular chancel screen.

The circular font is C12 and the bowl is enriched by twelve shallow round-headed panels. The panelled oak pulpit is dated 1631 and richly carved with foliated decoration. The reading desk is similarly detailed and also has demi-figures in high relief between the two main panels and above them a panel carved with grotesque animals and inscribed "ROGER OSLAND CHURCHWARDEN 1635". In the vestry is a C17 oak table with turned legs and a panelled oak chest of circa 1600. In the south aisle is a trefoil-shaped piscina and on a window sill are set two angel corbels and a coat of arms, probably from a wall memorial. At the south east corner of the tower are three medieval monumental slabs of sandstone (two being the broken halves of a single slab) carved with cross reliefs. The C19 oil lamps by Wright and Butler of Birmingham survive in the nave complete with their wooden stands attached to the pews and reading desk.

Memorials: in the chancel is a memorial to Luke Ashby, died 1716, with scrolled corners, a C19 memorial to Harriet Holland, died 1825, and another partially illegible one to Matthew Bolton embedded in the wall. In the south aisle is a C19 memorial to Thomas Hyde, died 1818, and to Henry Hyde, died 1798, with flanking pilasters decorated with husks. There are also numerous floor slabs mainly of C17 and C18 date, to members of the Pytts family.