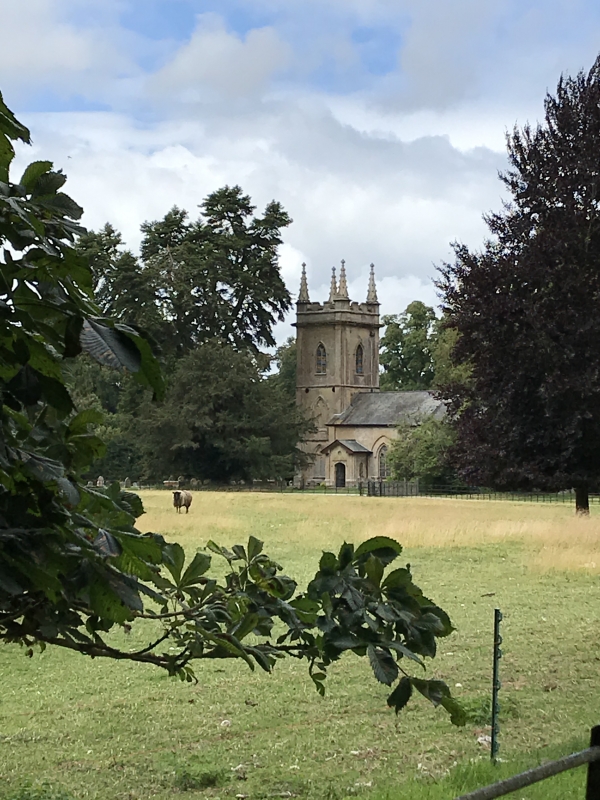 1818, and recent. A replacement of the medieval church, in the Gothick style.
Aisleless chancel and nave (virtually a single cell) with a western tower and a south porch. The classical regularity of the design is rendered in pointed Gothic, with a symmetrical treatment. Externally, the chancel has a buttress at each side and a slightly-projecting centrepiece containing a doorway (now a blank panel), with a window at each side (3 blank and a fourth a smaller replacement but glazed). The nave has 2 windows set within blind arcades; on the south elevation leaving space for the porch. The tower of 3 stages has crocketted pinnacles, a crenellated parapet, flat buttresses set back from the corners, Gothic weathered bands but classical cornice and plinth mouldings. All but the east window are coupled lights with cusped heads, within hoodmoulds. The low-pitched slate roof with eaves is quite recent, the former crenellated parapet (with corner pinnacles) of nave and chancel having been removed. Within the church remains original, with a pointed plaster barrel vault, with coved
cornice decorated with shields and ribs to show 4 bays in the nave, 4 narrower bays in the chancel, reducing to a 5-panelled ceiling above the sanctuary; the divisions between these sections are emphasised by dog-tooth ornament within wider rib mouldings. A screen is an arcade of 3 equal division, with richly-moulded arches, cusped and ornamented spandrels, supporting a moulded beam containing shields, roses, and portcullis devices; the columns and ½-columns are banded shafts. The east wall is panelled above the window arch (with ogee extrados). The east window has a realistic picture as glazing, elsewhere the windows have coloured side strips; the porch has some C16 glass. There is a series of fine wall monument tablets. (8 on the north and 5 on the south side) from mid C17 to mid C19. Modern slate roof, stuccoed walling.