Church of All Saints'

A Grade I Listed Building in Laxfield, Suffolk 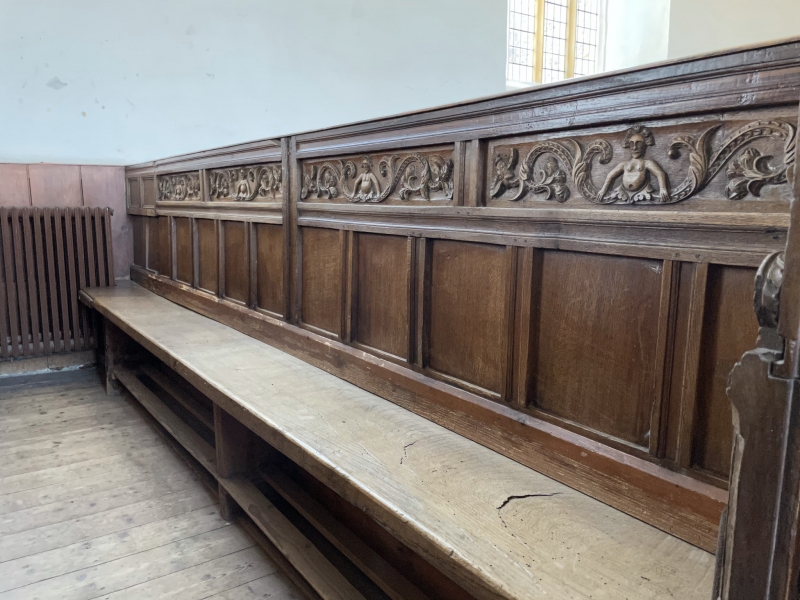 Entry Name: Church of All Saints'

Parish church. Medieval; east bay of nave and whole of chancel rebuilt 1827.
Nave, chancel, west tower, south porch. Nave and porch of flint rubble, with
stone dressings; the tower is largely faced in dressed stone. 1827 work faced
in white brick except to north where there is random rubblework. Slated roofs.
Very fine late C15 tower in 4 stages, with polygonal clasping buttresses.
Good flushwork panelling to buttresses, the belfry stage and the whole of the
west face. Enriched west doorway with carved spandrels; above is a quatrefoil
frieze and a 4-light window flanked by canopied niches. 4-light belfry
openings. Crenellated parapet with stone panelling and tall pinnacles with
crocketted spirelets. Early C14 nave in 5 bays, the windows later replacements
in Perpendicular style except for one to north. Easternmost bay has C19 3-
light windows with intersecting Y-tracery. C15 porch, repaired in C18 with
red brick: knapped flint facade flanked by buttresses each containing a
canopied statue niche; entrance arch hung with shields, and with carved
shields in the spandrels. Remains of a vaulted roof. The porch was intended
to have an upper storey and is said to have been left incomplete. Small
chancel with later additions; a 3-light east window. Interior. The scissor-
braced trussed rafter nave roof spans 11m; the arched braces spring from posts
supported by short hammerbeams, at the end of which are carved heads. Coved
cornice. In south west angle of nave is the niche of a banner stave locker.
Fine octagonal font of c.1500, carved with the Seven Sacraments and the
Baptism of Christ. Tall 2-stepped base with traceried risers, the upper step
with raised sections forming a Maltese Cross. Nave seating comprises: (i) 4
fine poppyhead benches with carved ends and backs and mutilated arm-rests;
(ii) 13 poppyhead benches of 1622; (iii) C18 box pews incorporating re-used
C15 and C17 poppyhead benches and C16 and C17 panelling, much of it
elaborately carved; (iv) at the west end tiered boys' seats of early C19,
incorporating early C17 work. At the nave east end is a dado of re-used
panelling. Good C15 rood screen with traceried dado and ogee-arched traceried
divisions above. Early C17 carved pulpit and contemporary reading desk in
similar style. Arms of Anne over north door.