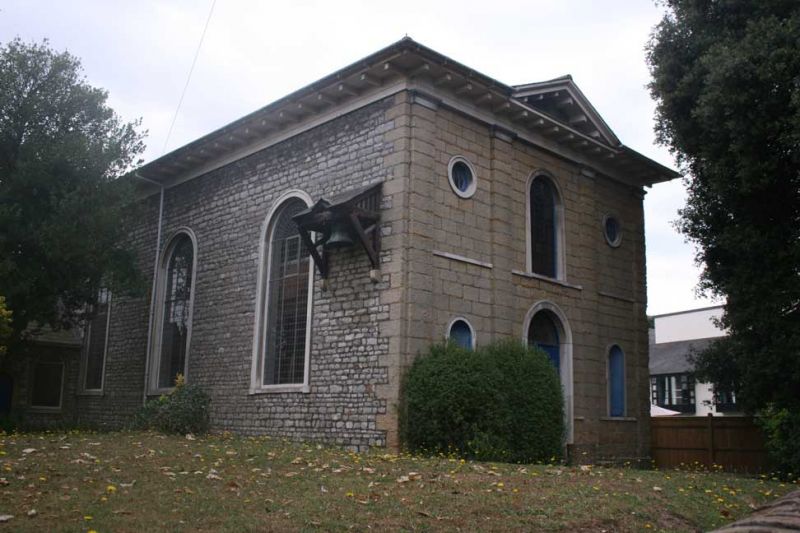 II
Church, built 1832 in classical style to the designs of George Draper; west tower removed and chancel built to the designs of Macdonald Gill (Eric Gill's brother) in 1929. The west end is ashlar masonry, the side walls galletted stone rubble brought to course. Hipped slate roof with deep eaves on long eaves brackets. Plan of rectangular nave with internal porch and stairs to west end gallery, which contains the organ; there is a small chancel of 1929, and a vestry to the north east.

EXTERIOR: The west end is divided into 3 bays by pilasters and has a pediment over the central bay. The pilasters extend over string courses at first and gallery sill level. Round-headed openings with Portland stone frames: a central doorway flanked by niches and an upper west window flanked by oculi. The doorway has a 2-leaf door and glazed fanlight with spoke leading, similar glazing to upper west window. The north side has large round-headed windows with spoke leading and a bell protected by a small lean-to roof on timber brackets. The south side has two blind windows. The vestry and chancel are in the same style with round-headed openings in Bath stone.

INTERIOR: Plain round-headed chancel arch in east wall. Flat plastered ceiling to the nave decorated with shallow plaster ribs in a lozenge pattern. The 1929 chancel has a canted boarded roof divided into panels by painted moulded ribs and painted with flowers and stars. 1929 timber panelled reredos with a painted cover and cresting of gilded lilies. The west end gallery is late C19-early C20 on timber posts, the front of the gallery broken forward in the centre. Early C20 benches with panelled backs and shouldered ends with round-headed panelling. C.1883 font with an octagonal stone bowl decorated with carving on a marble stem with marble shafts with stiff-leaf capitals.

HISTORY: The architect of this 1832 church, George Draper (c.1796-after 1861) established himself at Chichester and designed both classical and Gothic churches as well as other building types. The landscaped churchyard is thought to be the site of a round church known from engravings and demolished in 1642. The church ceased to be a parish church in 1954. It was used by a theological college for a period and in 2002 was used by the Servants of the Holy Cross, an order of Anglican Nuns, and administered by the Mother Agnes Trust.

REASONS FOR DESIGNATION
The Church of St Bartholomew's is designated at Grade II for the following principal reasons:
* A classical style church of 1832 with simple, yet elegant, proportions.
* The added interest of the painted decoration on the canted 1929 chancel ceiling