Honington House and Boundary Walls Adjoining to North and East 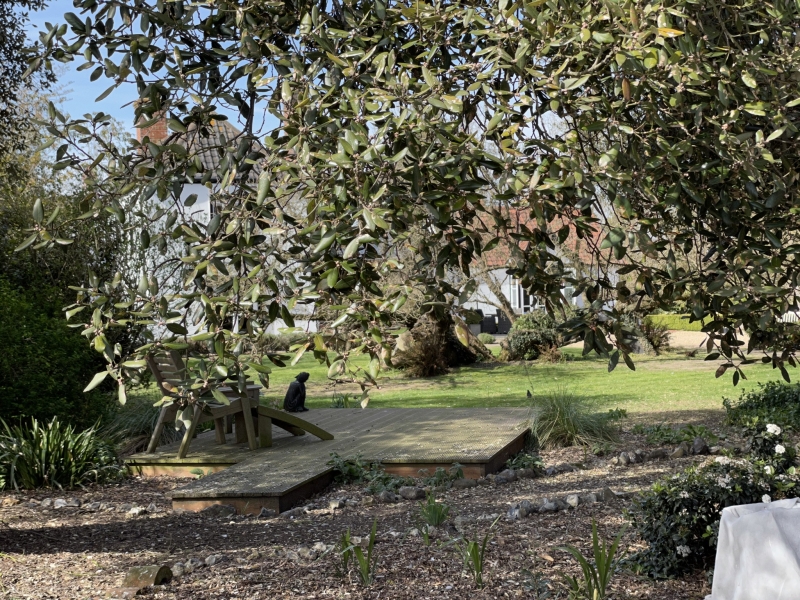 3/74 Honington House and
- boundary walls adjoining to
North and East.

Former Rectory. C18. 2 storeys. Timber-framed and plastered. Black glazed
pantiled roofs, fully hipped, with wide eaves overhang and mutule cornice.
Internal chimney-stack with plain red brick shaft. Centre front has a 2-storey
rounded bay. Range of sash windows in flush frames, all but one with the
glazing-bars removed. At the north-east corner, behind the front range, is a
2-storey block with fully hipped roof: apparently a separate building linked
with the main house. This has small-paned sash windows in flush frames. Coved
plaster ceilings to upper rooms. Stair wing at rear, containing an early C19
geometrical stair. One octagonal ground-floor room with coved ceiling.
Adjoining the north-east corner of the house is a long stretch of high rubble
flint wall, with rounded copings and red brick piers, at its western end
forming one side of a range of single-storey outbuildings, with clay pantiled
roofs, extending from the rear of the house At the north-east end, a doorway
in Gothic style, with pointed head and red brick jambs. The return wall along
the east side which forms the boundary between the garden and the school yard
has a similar blocked doorway.