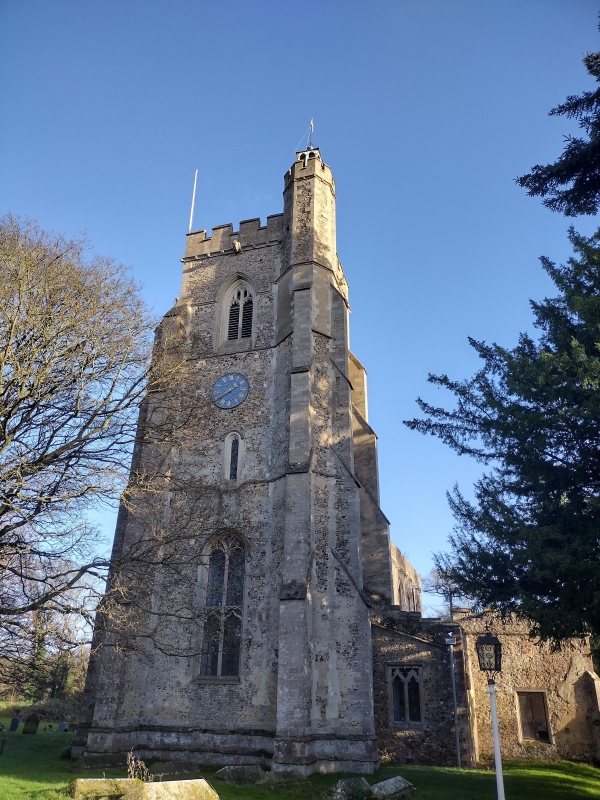 II*
C14 chancel and aisles, the rest largely C15 and C16 with some post-medieval repairs. Gutted by fire in 1914 and rebuilt 1914-16 to designs by Detmar Blow and Ferdinand Billeray, largely following the original.

MATERIALS
Flint rubble with stone dressings and some brick repairs. Fragments of render in places. Tiled and leaded roofs.

EXTERIOR
The rebuilding in 1914-16 largely followed the original design, but did not entirely obliterate the damage done to the masonry by the fire, which is less restored in appearance than many churches. The church had reached its present extent by the C14. The aisles have early C14 windows with ogee reticulated tracery toward their W ends, and there are good mid C14 windows with flowing tracery in the N and S walls of the chancel. The chancel has a steeply pitched roof and a crowstepped E gable. Tall W tower with an embattled parapet and SE stair turret that rises above the parapet. The stair turret has a small wooden bellcot on the top, perhaps C18 in origin. The S and W tower buttresses have grotesques. No W door, but a very tall W window of the later C14 with two, transomed lights. The scar of an earlier, steeply pitched roof is visible against the E face of the tower. The church was remodelled in the late C15 and early C16, and the rest of the aisle windows, the E window and those in the S chapel were originally of this date. Two-storied C15 S porch, very badly damaged, with the remains of statue niches on the buttresses and flint flush work blind arcading, repaired in brick, on the upper story. The S door is late C14. The openwork parapet on the clerestory has quatrefoils with feathered cusps above; only the fragment on the N survived the fire, that on the S was wholly rebuilt in the early C20 and has heads and grotesques on the string below it. The clerestory was also entirely rebuilt at this time, and has late C15 or early C16-style windows of three uncupsed lights in four-centred heads. The N aisle parapet has C18 brick repairs.

INTERIOR
The interior is very plain, and is largely C20 except for some of the window mullions and a few other fragments. The design is similar to its predecessor. The nave arcades are in a C14 style, with polygonal piers, moulded capitals, and pointed, chamfered arches. The corbelled shafts that formerly supported the nave roof, entirely destroyed in the fire, are indicated by schematic shafts and corbel blocks in the present clerestory. The late C15 doorway to the rood stair survives at the E end of the N aisle, and there are four medieval roof corbels surviving in the N aisle and two in the S aisle. Very tall, narrow tower arch, reaching almost to the top of the clerestory. The wide chancel arch is in a C15 style, with polygonal responds, moulded capitals and finely moulded arch. The S chapel opens to the chancel through a C15 style arch with unusual triple respond shafts that terminate in a blank section at the bottom, apparently an alteration by Blow and Billerey.

PRINCIPAL FIXTURES
Restored C14 piscina in the chancel, and another in the N aisle. Woodwork with blind tracery in the S chapel is late medieval and survived the fire because it was in the vicarage at the time. Royal arms of George III. Early C20 font, polygonal without a division between bowl and stem. Alternate faces end in a stylised volute. Tablet on the N wall of chancel to John Norfolk (d. 1749), vicar. Loose in the church, a few fragmentary monuments including parts of a C13 monument, and the wheatsheaf finial from the monument to Mrs Arethusa Vernon (d.1728), an imposing pyramidal tomb formerly located in the churchyard and demolished in 1983.

HISTORY
The church is pre-Conqeust in origin, and is mentioned in Domesday book. The earliest surviving fabric is early C14, however, and there is evidence much C15 and early C16 work. It was partly restored and reseated in 1888, but was entirely gutted by fire in February 1914. It was rebuilt in 1914-16 to designs by Detmar Blow (1867-1931) and Ferdinand Billerey (1878-1951). Blow worked for the Society of the Protection of Ancient Buildings on the restoration of the tower at nearby Clare (1898-9), among other projects. He was in partnership with the French-trained Ferdinand Billerey from 1905, and they worked on many country and London houses, including many on the Grosvenor estate. His conservative restoration of Hundon is characteristic of his Arts-and- Crafts ideals, a very different aspect of his work from the later metropolitan work he undertook.

REASONS FOR DESIGNATION
The church of All Saints, Hundon, is designated at Grade II* for the following principal reasons:
* For its extant earlier fabric, which constitutes a notably picturesque ensemble of several periods.
* For the care of the post-fire restoration, displaying Blow's Arts and Crafts sensitivities towards such work.