A Grade I Listed Building in Kessingland, Suffolk 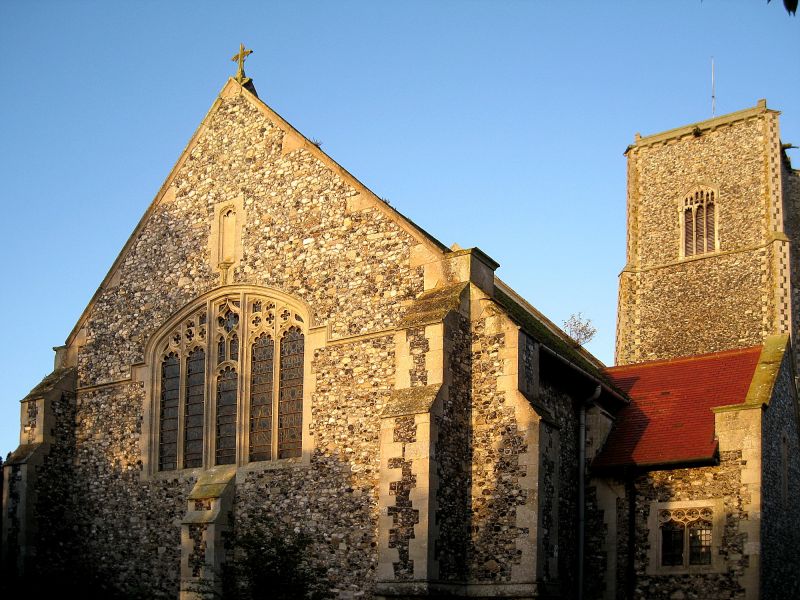 Parish church. Mid C15 tower. The remainder of the church has been rebuilt
as follows: chancel, south aisle and south chapel pulled down late C16, and
the south arcade infilled to form the present south nave wall; north nave wall
collapsed 1668 and rebuilt 1694-5 slightly inside the old alignment; chancel
added 1908, vestry added 1980. Nave, chancel, west tower, south porch, north
vestry; detached remains of south aisle in churchyard. Mainly flint rubble
with stone dressings; the north nave is red brick with some burnt headers.
The nave roof is thatched, the chancel plaintiled. Fine 4-stage tower, 30m
high, of knapped flint with flushwork to the plinth and buttresses; stone
string courses; later flat parapet of red brick. The west doorway has jambs
and arch in 2 orders, decorated with various motifs including fleurons, mitre,
crown, anchor and shields; label mould supported by lions, with angels in the
spandrels. 3-light west window, flanked by tall canopied niches, now empty.
Between the window and doorway is a frieze of wavy quatrefoil tracery and a
central figure of St. Edmund. 2-light windows at ringing chamber level, 3-
light belfry openings. The south nave has a range of 4 renewed 2-light
windows in Perpendicular style; the porch is dated 1578 with the initials
'RB'. The north nave wall has 3 late C17 cross windows under segmental
arches; mid C20 glass. A buttress has a stone inscribed 'John Camp 1695'.
The chancel is in Perpendicular style; to the south is a re-used 3-light C15
window. Interior. The 6-bay south aisle arcading is still visible; it
extended a little further east than the present chancel arch. At the west end
of the north nave wall is the inscription 'This Church was put Out and Rebuilt
by the care of John Campe & Thos Godfery Gent in the Year 1694 and Finished in
95'. Fine C15 octagonal font: canopied figures on the bowl panels and against
the stem, angels with outstretched wings on the underside of the bowl. Arms
of George II in base of tower. The furnishings are mostly C20. Graded I for
medieval work, notably the tower.