Church of All Saints and Lychgate 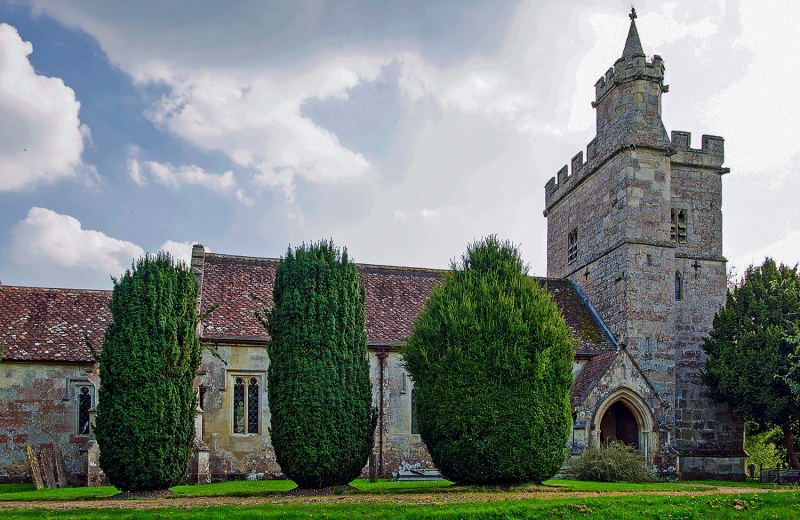 Entry Name: Church of All Saints and Lychgate

EXTERIOR: the C14/C15 three-stage west tower has a moulded plinth and diagonal buttresses. Its west side has a blocked Tudor-arched doorway with an inserted tablet to John Twogood, who died in 1663. Above is a three-light Perpendicular window. The second stage has a two-light cusped square-headed window with hoodmould, while the offset bellstage has two-light cusped square-headed louvred windows. It has a string course to the battlemented parapet with corner gargoyles. The stair turret on the north side has loopholes, a chamfered top with battlemented parapet and gargoyles, and a short spire. The C19 gabled porch has diagonal buttresses and coped verges with a cross finial. It has a moulded pointed doorway with attached shafts and a hoodmould. The north side of nave has four two-light trefoiled square-headed windows with hoodmoulds. The C19 gabled vestry to the east has a chamfered pointed doorway to its west wall, and two-light Perpendicular-style and C16-style windows with hoodmoulds to the north and east respectively. The north and south sides of the chancel have a two-light trefoiled square-headed window with hoodmould. The east end has diagonal buttresses and a three-light Perpendicular-style window with pointed hoodmould. The projecting organ chamber on the south side has a blind two-light pointed Perpendicular window. The Benett chapel also has diagonal buttresses. The east window is a two-light pointed geometric-style and there is a three-light pointed Perpendicular window to the south. Attached to the south wall of the chapel is a low vault with stone-slate roof and a blocked segmental arched opening to the south, the mausoleum of the Benett family. Its roof has collapsed. The south side of nave has two two-light trefoiled square-headed windows and a matching single-light window.

INTERIOR: the porch has an arch-braced, collar-rafter roof and it has a pointed inner doorway with chamfering. The nave has a C19 six-bay roof with cusped, arch-braced collar trusses rising from carved corbels, and herringbone boarding; the internal walls are plastered. The timber pulpit and the nave benches are of standard design and probably belong to the restoration of 1863; two frontals with poppy heads may survive from the original C19 seating plan. The baluster stone font is C18. There are plain marble tablets in the nave to members of Eliot family, and the baluster stone font at the west end is C18. The tower has a double-chamfered arch. Its first floor retains a fireplace with chamfered jambs and a lintel carved with rosettes. There were three bells at Norton in 1553, one which survives and is believed to have been cast in Bristol in the late C14; there are now five. A plain chamfered arch leads to the chancel which has a polychrome tiled floor. There is a C19 sedilia with pointed-arched heads to the south wall, a pointed cupboard on north wall, and simple altar rails. A chamfered pointed doorway leads into the vestry. The chancel roof is similar to the one in the nave. The organ, on the south side of the chancel, is dated 1867 and is by William Sweetman of Bath. The stained glass in the east window depicts the Crucifixion and is characteristic of the 1840s; the west window dates from 1863.

On the south side of the nave, the Benett chapel has a C14 chamfered pointed archway on chamfered and roll-moulded responds set with a pair of late-C17 wrought-iron gates. It has a three-bay hammer-beam roof with carved angels and cusped wind bracing with dentilled mouldings. The chapel retains a good collection of floor and wall monuments to members of Benett family, including a brass (floor) to John Benett (d.1461) and his wife, and another on the west wall to Thomas Benett (d.1605) and his wife; several Gothic and classical marble wall tablets, including one to Thomas Benett died 1653; and two classical revival wall monuments, dated 1922 and 1947.

SUBSIDIARY FEATURE: at the entrance to the churchyard, to the north-east of the church is a lych gate that was erected in 1893 as a memorial to family members buried in the churchyard. It has timber-framed sides, resting on a stone plinth with stone capping, and a pair of timber gates. The hipped roof has plain and fishscale tiles and crested ridge tiles.

Documentary records indicate that a church existed at Norton Bavant in Norman times since a priest is mentioned in the mid-C12 and part of a font of the period was found in 1894 embedded in the tower. Nothing, however survives of this building. There was a chantry chapel in the church (dedicated to St Thomas the Martyr) in the mid-C14 and the first stage of the tower, confirmed by the presence of a fireplace, was used as accommodation, presumably for a chantry priest. The upper stage was added in the C15, and this was not only heightened, but was also widened with the addition of the corner turret so that it sits asymmetrically in relation to the body of the nave. The Benett family, who started out as clothiers, were lords of the manor here in the mid-C15 and the present Benett (north) chapel probably marks the site of its medieval predecessor.

Dorset architect, William Walker (1789-1843), largely rebuilt the body of the church in 1838-40 on the footprint of the medieval building, adding 140 free seats. A plan, drawn before the 1838-40 rebuilding, shows an almost identical footprint (although it is recorded that the church was very slightly enlarged). Tablets inside the church record that the chancel was ‘rebuilt’ by John Benett in 1839; that the church except for the tower was ‘restored throughout’ by Miss Ethelred Benett, the first stone being laid in 1838, and it was consecrated in 1840. Further restoration was carried out in 1853, and the tower was restored in 1894. The ‘burial aisle’ was ‘restored’ by Ellen Benett in 1896. Repairs were carried out in the late C20.

All Saints' Church is listed at Grade II for the following principal reasons:
* Architectural interest: the tower has a good survival of C14 and C15 fabric, while the mid-C19 restoration represents an interesting example of early Gothic-Revival architecture;
* Fittings: the decorative fireplace in the tower and the C17 wrought-iron gates to the Benett chapel are particularly noteworthy;
* Historic interest: it demonstrates different phases of continuous community use and worship from the C14 to the present;
* Historical: the church’s association with the Benett family, and the memorials to their descendents conveys a measure of historic interest.