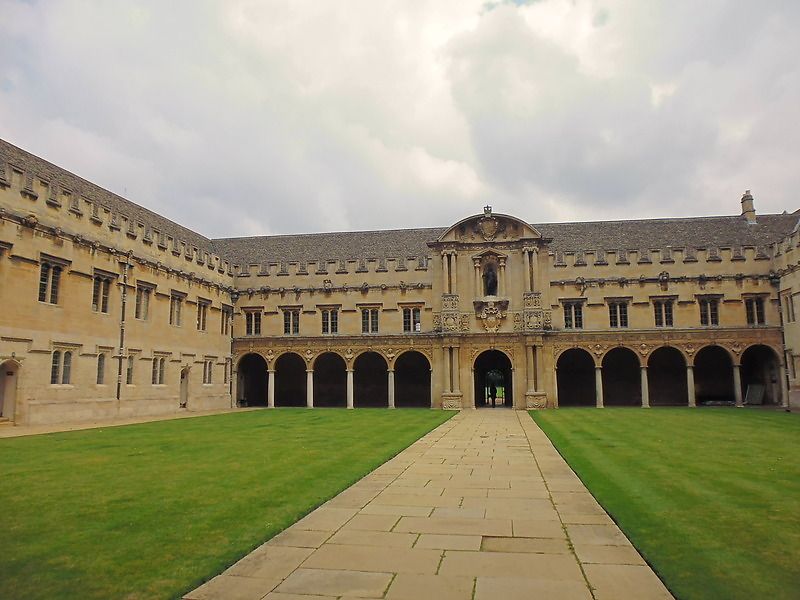 ST J0HN'S COLLEGE
1.
1485
Canterbury Quadrangle
SP 5106 NW 5/525E 12.1.54.
1
2.
Built 1631-36 by Laud, originally in Headington stone and incorporating
old library of 1596-8 in South range, the masons being, 1631-33, Richard
Maude, Hugh Davis and Robert Smith and, 1633-36, John Jackson with Anthony
Gore and Harry Acres, carvers. The whole refaced in Clipsham stone, 1922-36.
On East and West sides is a loggia and elaborate centrepiece (possibly by
Nicholas Stone), the statues being by Hubert le Suer. The pillars of Bletchingdon
stone, 5 being replaced, 1905, in Portland stone. Major internal alteration
1970-1971.
Garden front of the East Range on East has 5 oriels and fan-vaulted passageway;
retains Headington stone with dressings renewed in Clipsham stone 1918.
Upper floor has library fitted up 1838.
1st floor on West Range and West part of North Range forms President's Lodging.