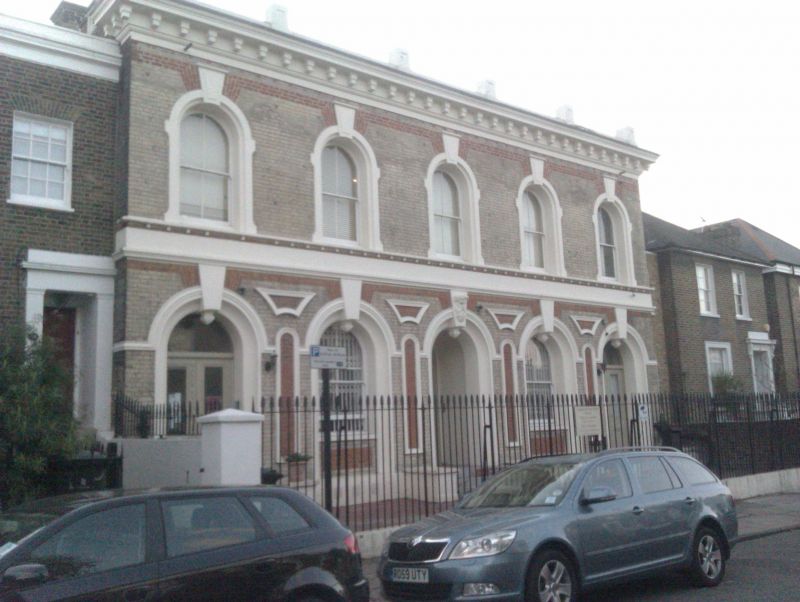 Former provident dispensary, 1854 by James Thomas Knowles Snr. Damaged by fire in 1989 and restored in the 1990s with alterations to the rear elevation and interior.

Former provident dispensary, 1854 by James Thomas Knowles Snr. Damaged by fire in 1989 and restored in the 1990s with alterations to the rear elevation and interior.

PLAN: two storeys with a five-bay frontage. The original ground floor plan with two consulting rooms either side of a central entrance with passageways to the sides giving access to a waiting room in a separate range at the rear, has been altered by the extension of the consulting rooms (now dance studios) to include the passageways, and division of the rear waiting room. The original double-height rear waiting room has had a floor inserted. There are two single-storey outshuts on either side of the rear elevation, of which the northern is original and the southern modern.

EXTERIOR: the front (east) elevation is in an Italianate style with each of the five bays of each floor containing a round-arched opening with deep hollow chamfered reveals. On the ground floor the first, third and fifth bays have entrances with glazed double-doors and fanlights reached via stone steps, with timber sash windows in the remaining bays. The ground floor arches have moulded architraves and impost bands and dropped keystones with pendants. The keystone above the central entrance is decorated with a mask. Between the bays are shaped red brick panels set in moulded stucco surrounds below continuous flush red brick courses. Below the windows are further flush red brick panels. The storeys are divided by a plain entablature. The first-floor arches have ears and feet and keystones with a top moulding. The elevation is topped by a block modillion cornice and block-shaped antifixa (projections above the cornice).

The five-bay rear (west) elevation has been altered. Of yellow stock brick, it was originally single-storey with tall, recessed, round-arched openings to the three middle bays. The entrance was in the central bay. Following the fire in 1989 the elevation was remodelled to allow the addition of an upper floor. The parapet was raised and arched openings extended to provide arched windows at first-floor level. Square-headed openings with rubbed brick lintels were introduced on the ground floor. Windows and doors are modern. The two single-storey outshuts have pitched slate roofs. The northern, C19 outshut has stone copings to the gable and a timber casement window with a rubbed-brick lintel to the west elevation. The infill of the southern elevation is modern. The southern outshut (*) is modern.

INTERIOR: the interior of the building was refurbished following the 1989 fire. All finishes are modern with suspended ceilings (*), partitions (*), dance studio fittings (*) and rebuilt stair case (*). A first floor has been inserted into the rear range (*). No significant original fixtures remain.

SUBSIDIARY FEATURES: the metal railings and their footings at the front of the building are modern (*).

* Pursuant to s.1 (5A) of the Planning (listed Buildings and Conservation Areas) Act 1990 ('the Act') it is declared that these aforementioned features are not of special architectural or historic interest.

Dispensaries, providing free medical care for the poor, had their origins in the late C17 when the London Dispensary for the Sick Poor was opened by the Royal College of Physicians in 1698 on Warwick Lane, London. However, in part following opposition from private apothecaries, the dispensary closed in 1725. By the late C18, with the growth of population in major cities, provision of medical care for the poor once again became an issue, which was taken up by philanthropic individuals and societies. In 1770 Dr John Coakley Lettsom (1744-1815) opened the General Dispensary in Aldersgate Street, London, which was staffed by both physicians and apothecaries. By the start of the C19 a large number of charitable organisations, both in London and nationwide, had followed this model of providing free healthcare for the poor without the need for admission to a hospital. However, by the early years of the C19 attitudes in society were moving away from providing charitable assistance to the poor towards the idea of ‘providence’ whereby the poor should be encouraged to help themselves. This was reflected in medical provision by a new system for dispensaries, first proposed by a Warwickshire surgeon, Henry Lilley Smith (1788-1859), who divided the poor into three classes: those in work who could normally provide for their families, seasonally unemployed workers and permanent paupers. Those in employment - the ‘free class’ - paid a weekly subscription, seasonal labourers - ‘the charity class’ - had their subscriptions paid by charitable donation and care for the poorest - the ‘pauper class’ - was paid from parish subscriptions. Care was accordingly prioritised between subscribers and charity patients. The first ‘provident dispensary’ was opened by Lilley Smith in Southam near Coventry in 1823. In London, between 1833 when the St Marylebone provident dispensary opened, and 1898 by which time their role had been largely replaced by outpatient departments in hospitals, 46 provident dispensaries were opened, compared to 27 charitable dispensaries. The provident dispensary movement remained a significant presence in British medicine until the advent of the National Health Insurance Act of 1911.

The Clapham General and Provident Dispensary was founded in January 1849 and its building at 42 Clapham Manor Street, paid for by public subscription, was opened in May 1854; it is now one of the earliest provident dispensaries to survive in London. It was designed free of charge by the architect, James Thomas Knowles Snr (1806-1884). The original design for the façade included a triple-arched loggia which was not built, presumably for reasons of cost. The plan, which was originally for a larger building with more accommodation for residential staff, consisted of two consulting rooms either side of the main entrance with a large double height waiting room at the rear reached by separate passageways (possibly for subscribers and charitable poor respectively) down the side of the consulting rooms. On the first floor was a committee room and dispenser’s accommodation.

The dispensary appears to have closed in the early 1950s and by 1959 the building was in use as a London County Council occupational training centre, at which time a large extension was added to the rear (now demolished). In 1989 the building was damaged by a major fire which destroyed much of the interior. It was restored in the 1990s with alterations to the rear elevation and the interior space. Since 2005 it has been in use as a ballet school.

The former Clapham General and Provident Dispensary, 42 Clapham Manor Street, LB Lambeth, built in 1854 by James Thomas Knowles Snr, is listed at Grade II for the following principal reasons:
* Architectural interest: a work by a noted C19 architect, in his preferred Italianate style;
* Historical interest: a good and relatively early example of a building of the provident dispensary movement, which informs our understanding of C19 health care provision.