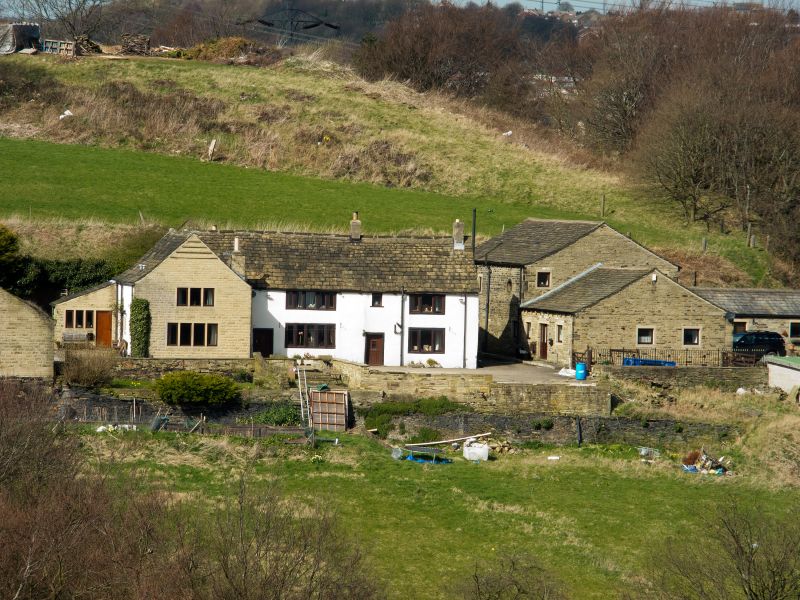 The item shall be amended to read: SUNNYBANK LANE
Sunny Bank Farmhouse

Interior: Much timber-framing survives, possibly from an earlier building.
There is a timbered arcade between the aisle and hall with posts and braces
visible. Board and muntin panelling to ground floor and close studded wall to
1st floor. Similarly the division wall between hall and west-wing was formerly
divided by a timber partition of which the closed aisled truss remains which is
a king-post truss with the unusual feature of cusped braces to the ridge. The
west-wing was entered from the hall by 2 separate doorways the southern of which
remains its ogee doorhead. There does not appear to have been an inter-
connecting door between the 2 rooms in the wing. The northern room retains its
original fireplace in the west wall with a Tudor arched lintel and simple
chamfered surround. A post and braces run in front of a stone wall and below
the closing truss of the hall. Between the chambers is a closed king-post truss
with 8 vertical struts. The king post truss in the East-wing is closed with 6
vertical struts and is the only one with a diagonally set ridge. The projecting
rear wing would appear to have been the service end with kitchen and possibly
loom shop. Though externally this building has been altered, internally is
preserved a C16 timber-frame largely untouched.