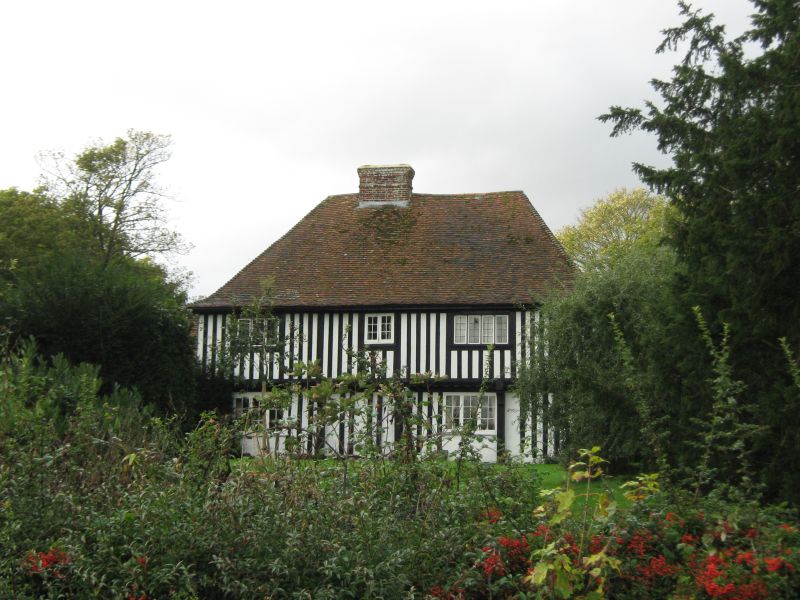 TR 03 NE ALDINGTON ROMAN ROAD
(south side)
4/51 Cobb's Hall
13.10.52 II*
House. Circa 1525-1530, altered early C19. Timber framed, close-
studded and exposed with plaster and painted brick infill, with red
brick to return and ragstone, red brick and some tile hanging to rear
and right return elevations. Plain tiled roof. Four bay (3 full bay
and firebay) continuous jettied lobby entry plan. Two storeys on
ragstone plinth, with jetty with moulded bresummer on brackets (and
underbuilt at left and right ends by projecting brick walls of return
elevations). Hipped roof with swept-out eaves. Moulded stack to centre
left. Three wooden casements on 1st floor (leaded lights to left and
to right), and 2 tripartite casements on ground floor with small light
to end right. Original entry to centre left, now bricked in with
applied timber studding over, present entry by half-glazed door in
right return. Rear elevation: built early C19 (dated 1817) with 18
inch thick ragstone walling, with red brick dressings to small wooden
casements on both floors, with brick 2 storey bargeboarded gable block
and single storey kitchen extension. Late C20 glazed conservatory on
ragstone base. Interior: clasped purlin with windbrace roof, reeded
and stop chamfered ceiling beams and joists; chimney bresummers with
fernleaf and flower enriched spandrels and painted overmantel (in
scallop pattern, now papered over) on ground floor, plaster overmantel
on upper floor with 3 scenes of Adam and Eve separated by 4 columns.
Upper great chamber with plaster ceiling with shallow bosses and
fleur-de-lys. Corridors inserted in both floors to give access to
rear elevation, where the small casements (9 x 12 inches to exterior)
are splayed to 18 inch square internally, set 4 feet off floor level
(musket height) with a larger ground floor opening (for a cannon).
Formerly said to have been part of the defences of Romney Marsh against
Napoleon, these features are as likely to have belonged to a Watch
House of the Preventive services (one opening initialled and dated 1817
seems to support this). Traditionally associated with the Holy Maid
of Kent (Elizabeth Barton), born 1506, whose prophecies (1525-34) in
particular against Henry VIII's first divorce, led to her execution
(with others). She was maid servant to Thomas Cobb, steward to the
Archbishop of Canterbury's estates in Aldington. Other sources
place Goldwell (see item 4/39 ) as the scene of those events, and
since Cobb died at Goldwell in 1528, it suggests Cobb's Hall may not
then have been built/completed for him and may not be as early as
previously believed (said to be one of the earliest continuous jettied
houses known in rural areas). (See E.W. Parkin, Archaeological
86, 1971; Alan Neame, Elizabeth Barton, Nun of Kent).