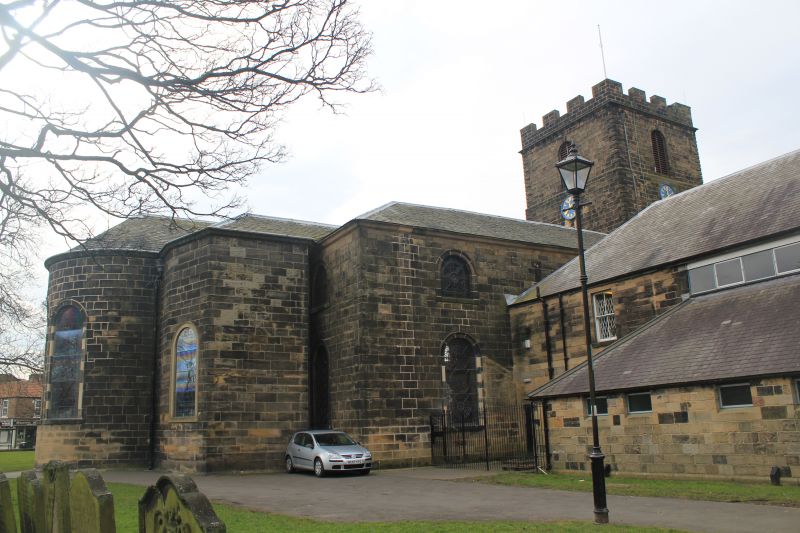 Church, Anglican mid to later C18 incorporating a fragment of a mid C17 church, the latter built by Robert Morley and completed by Robert Trollope; tower and extensive rebuilding by John Dodds in 1786-88 and 1792-3 respectively. Neo-classical in style. C19 and C20 alterations.

Church, Anglican mid to later C18 incorporating a fragment of a mid C17 church, the latter built by Robert Morley and completed by Robert Trollope; tower and extensive rebuilding by John Dodds in 1786-88 and 1792-3 respectively. Neo-classical in style. C19 and C20 alterations.

EXTERIOR: the three-stage tower has a west double door under an ornamental fanlight, flanked by large blind roundels and with a large roundel above. The first stage has round-headed window with keystoned surrounds and a clock face to each face and the upper stage has belfry openings under a cornice and battlemented parapet; it is surmounted by a weather-cock finial and an early C21 flagpole. The three-bay nave has full-height aisles with a quoined, slightly-projecting central bay containing a double door with an ornamental fanlight; immediately above is a stone tablet bearing a sundial flanked by ionic pilasters bearing an inscription recording the foundation of the church and major additions. There is a roundel and above, and the flanking bays have tall round-headed windows under smaller similar gallery windows and there are similar windows in the right and left returns, the single-bay chancel and the stepped in apse. There are hipped roofs to the nave, aisles and chapel with the exception of the chancel, which has a roundel. A rainwater head dated 1832 in the angle of the chancel and south aisle may be re-sited from an earlier, smaller chancel.

INTERIOR: plainly painted plaster walls throughout with flat, corniced ceilings; there are egg-and-dart and Greek key stucco decoration to the nave ceiling and motifs of the Trinity to the chancel ceiling. There are numerous C18 and C19 memorials attached to its walls. The chancel, with modified arch and C20 fittings, has a tripartite East window with stained glass by Leonard Evetts depicting the Apocalypse, panelled below. The mid-C20 seamen’s chapel to the left is separated from the chancel by an oak and wrought iron screen decorated with tridents and stars and surmounted by two C19 model sailing ships with local connections. The carved decoration above the chapel entrance incorporates The Coat of Arms of Tynemouth Monastery and sea motifs. The chapel’s east window, also designed by Leonard Evetts, depicts three lifeboats marking important stages in the history of the lifeboat service in Tynemouth, the Original (1789), the Constance (1862) and the Tynesider (1962). Stained glass throughout the church is mostly post-war in date with the exception of some coloured stained glass to the north wall. The elliptical-arched nave arcades are carried on slender Tuscan columns and there are cast iron columns to the inserted west gallery, which carries the extended C19 organ. Below are the village stocks and the Milbourne Tombstone (1689). Original entrances with classical doorcases are set in the centre of the north and south aisle, and to the right of the latter is an C18 font comprising a small fluted bowl on a moulded pedestal. Two stone grave covers are set in floor of the east end of the nave: Stephen Dockwray, vicar, died 1681 (this partly missing) and members of the Howlett family, died 1683 and 1694. The tower retains a stone winder staircase lined with cow hair plaster and the original clock and bells within their original frame.

In 1659 Vestry Minutes record an agreement with Robert Morley Master Builder ‘for the building of a new church’; Morley was a mason who worked as such on Auckland Castle Chapel between 1661 and 1664. While clearly the builder of Christ Church, further documentary evidence would be required to identify Morley as its designer. Robert Trollope, a highly regarded C17 architect completed the building, which was of cruciform plan. In 1753, 1764 and 1785 the church was extended by infilling three of the corners, and the regional architect John Dodds added a west tower between 1786 and 1788 complete with six bells. Dodds also carried out extensive alterations, including infilling the remaining north east corner and raising the walls, while enlarging the church between 1792 and 1793 resulting in a church of square plan. Only short lengths of the north and south wall of the C17 building are considered to remain, encased within the north and south aisle walls of the present church. The organ, said to have come from Vauxhall pleasure gardens in London, was installed in the west gallery in 1794 and the wooden font was given in 1807. The tower clock was added in 1859 and four further bells were added, two in 1874 and two in 1878. In 1869 the chancel was enlarged, an organ chamber constructed, the present pews and the plaster ceiling in the Chancel were added.

During the first half of the C20 a second storey was added to the vestry block, and a new oak pulpit, a memorial to the Fallen of the 'Great War', was added, as were the carved oak altar rails. During the Second World War, most of the windows were lost to bomb damage and in 1953 a Second World War memorial oak Tester was added to the pulpit. The second half of the C20 saw further alterations including the removal of the north and south galleries, and the creation of a new west gallery. The organ was re-sited in the latter, and was extended using mahogany retrieved from HMS Calliope; the former organ chamber was dedicated as the seamen’s Chapel of St Nicholas. The chancel was refurbished including the installation of the east window by Leonard Evetts, the creation of a curving chancel step and the modification of the chancel arch to resemble those of the nave arcade. The attached parish centre by Rock Townsend was added in 1984 and led to the reconfiguration of the old vestry block.

Leonard Evetts (1909-1997) trained at the Royal College of Art under Martin Travers and became Master of Design in the Department of Fine Art at Newcastle University; he is known for his ability to combine creative thought with fine workmanship in the Arts and Crafts tradition and as a creative artist executing a range of commissions including alter frontals, ecclesiastical vestments, watercolours and stained glass. His work can be found in churches and Cathedrals throughout the UK and Europe.

Christ Church, mid to later C18 incorporating a fragment of a mid C17 church, with C19 and C20 alterations is listed at Grade II for the following principal reasons:
* Architectural interest: it is a relatively early example of plain neo-classicism, which utilises characteristic features such as round-headed windows, roundels and internal plaster work;
* Internal fittings: the interior comprises fixtures and fittings of various dates but individual fittings of merit including the organ inserted in the C18, the early C19 wooden font and the C20 stained glass of the East window and seamen’s Chapel of St Nicholas by the highly regarded creative artist Leonard Evetts;
* Historic interest: the construction of a church on this site during the English Commonwealth, is of interest as is the incorporation of early fabric in the later church.