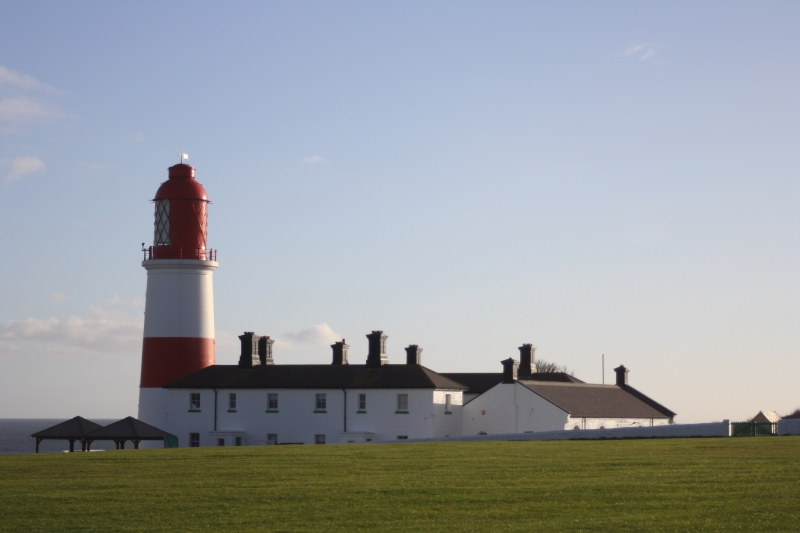 Lighthouse, engine house, boilerhouse, workshops and houses. 1871 by Sir James N Douglas
for Trinity House, London. Rendered; Welsh slate roofs. 4 ranges of buildings
around a courtyard with the lighthouse connected to the east range. Lighthouse :
75-foot tapered tower with square window openings and at top south a window to allow
a light to be seen for entrance to the Wear; overhanging walkway with iron railings
around dome-topped lantern of iron. Engine house, boilerhouse and workshops : western
one-storey range having central door and 3 windows all round-headed in raised surrounding
arches with keystones, garage door and modern door inserted; raised quoins; moulded
kneelers supporting painted gable coping; 2 painted square end chimneys. Houses :
south, east and north 2-storey ranges each containing 2 houses with projecting square
porches having 5-panelled doors in the return; 3 sash windows to each house front, 2
in each west gable joining the one-storey block; raised quoins;. roof with overhanging
eaves is hipped, with 2 painted, corniced panelled chimneys to each ridge. A passage
of one storey connects the lighthouse to the east range. Historical note : stands on
Lizard Point, but to avoid confusion with Cornish Lizard Lighthouse named after Souter
Point - next point south. The first lighthouse specifically constructed for electric
illumination (carbon arc lamps), after experiments at Dungeness. Original bi-focal
lens still in use. Source: D B Hague and R Christie Lighthouses : their architecture,
history and archaeology (1975). Llandysul p.160.