A Grade I Listed Building in Mereworth, Maidstone, Kent 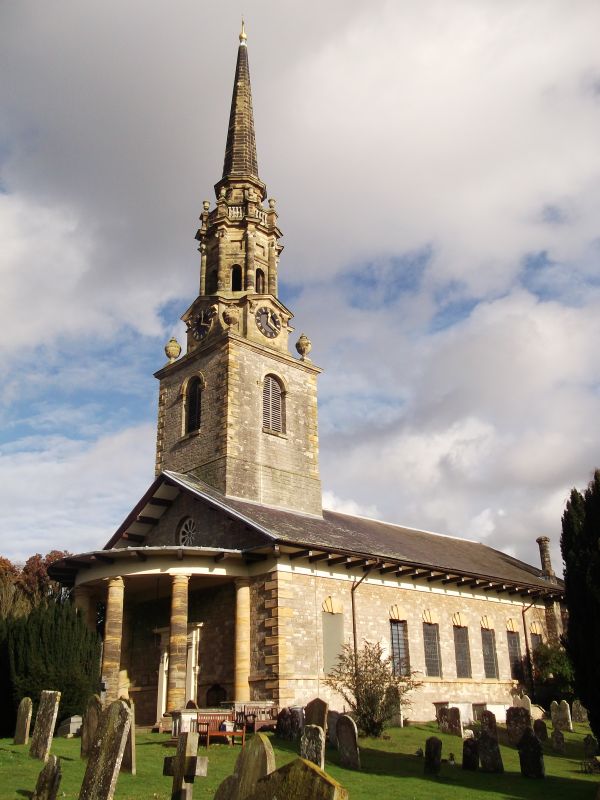 Parish Church 1744-46 for 7th Earl of Westmorland after the old Church had been taken down
to make way for the Castle. Very probably by Henry Flitcroft. Temple church,
taking up ideas laid down by Jones and by Hawksmoor & Archer in the 50 New
Churches Commission, purified by neo-Palladian Theory. Ragstone blocks with
sandstone ashlar quoins and dressings. Tiled slate roof with colossally deep
eaves and pediment ends. West tower copied almost directly from Flitcroft
St Giles-in-the-Fields. Square town base with arched belfry openings on west
and with urns atop corners. Octagonal clock stage with pediment aedicules
on each side. Columned and balustraded octagonal 3rd stage supporting
octagonal pedestal of eight-sided obelisk like tower. Semi-circular Tuscan
west porch with eaves cornice around. 7 bay nave with key-blocks to windows.
East with 3 windows with arched central one, giving effect of Palladian
window. Internal window in east pediment. Oculus in west pediment. Interior
with barrel-vaulted nave three times wider than aisles themselves. More a
series of square bays. 6 bays with close-set Doric columns carrying flat
entablature. Attached half-columns against all four walls. Columns painted
to look like marble, ceilings with coffering. Tomb to Sir Thomas Faut: d.1589
Erected 1639. 2 pairs of Corinthian columns supporting entablature curving
forward in the centre with putti below. 2 reclining effigies beneath with
kneeling sons. Attached to exterior wall to south, Monument to Francesco
Sleter, decorative painter, d.1775. See M Whiffor, Smart and Georgian
Churches outside London, London 147/48.