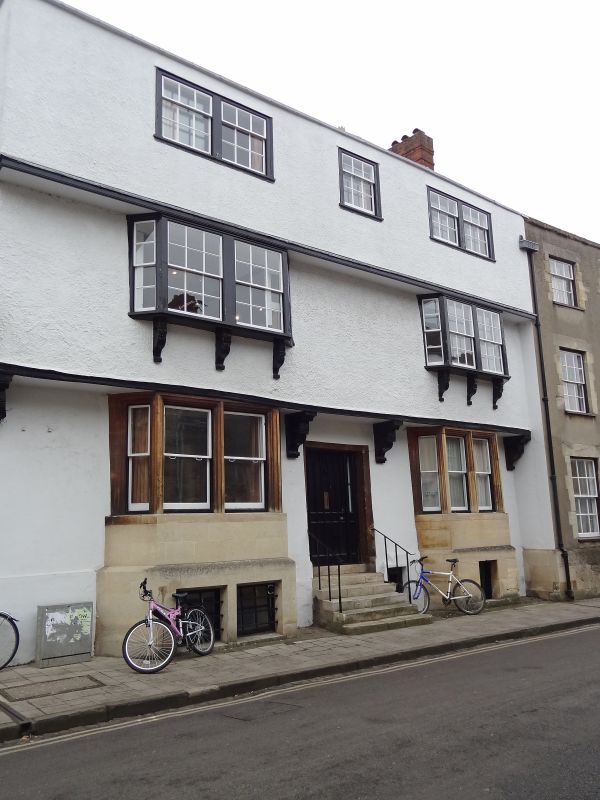 HOLYWELL STREET
1.
1485
(North Side)
No 2
SP 5106 NE 6/223 12.1.54.
II GV
2.
House. RCHM 219. Originally early C17, Partly re-modelled in C18. 3-storeyed
timber-framing on an ashlar base with cellars, the windows of which are above
the street level. These are modern brick stacks and a Welsh slate roof.
On the south elevation is an overhang at the 1st and 2nd floors. On the ground
floor are 2 projecting and splayed stone bay windows with modern stone 4-light
moulded mullioned frames with sashes. The front door is in a plain moulded
stone frame and there are 5 stone steps up to it. Over the doorway, the overhang
of the 1st floor (which is roughcast) is supported on 2 modern wooden scrolled
brackets, on the face of each of which is a shield, that on the west bearing
3 chevrons (? for Merton College), that on the east being blank; there are
similar but ancient brackets (with blank shields) at the east and west ends
of the house at this level. The 2 windows of the 1st floor each project
on 3 wooden scrolled and enriched consoles on which are blank wooden shields;
each window has 2 C18 sashes to the front and 1 small sash on each return.
The 2nd floor has 5 sash windows (the 2 outside having double sashes) and
the whole of this floor is boxed-out and roughcast and is a C18 (? late
C17) addition or remodelling. To the west is a single-storeyed stuccoed
block on cellars with an attic dormer in a modern red tile roof; in the ground
floor is a 3-light stone-framed sash window, the whole being in a shallow
recess with a segmental head. Interior. RCHM p 182a. Includes a C18 fireplace
and some C18 panelling. For a drawing the exterior made in 1822 by J
C Buckler, see Bodl M S Don a. 3 II, 31.

All the listed buildings on the North Side form a group.