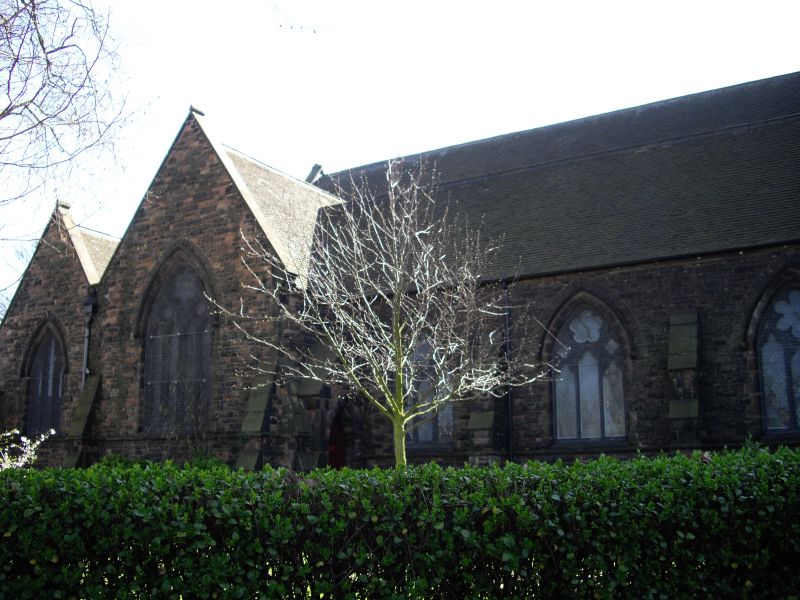 Church. 1866-7 by WD Griffin. Rock-faced red sandstone with tile roof.
Comprises a north-west tower, nave, aisles under pitched roofs, north and
south transepts, lower chancel, and south chapel. The tower has angle
buttresses, and a parapet stepped up in the centre. The bell openings are
moulded, of two lights with Geometrical tracery and with gabled hoods over.
Below, on the west side, are two one-light windows. The west doorway, at
the base of the tower, is moulded and pointed with a gabled hood over. The
windows contain Geometrical tracery of various descriptions. The west nave
window is of five lights, the west window of the south aisle of two. The
south aisle is of four bays separated by buttresses, the north aisle of three,
with a further one-light window to the right. The north transept has two
windows, of three and four lights. The south transept has one of four lights.
The east window is of five lights. Interior: nave has four-bay arcades of
pointed arches chamfered in two orders. The columns have foliated capitals
and are of four clustered shafts, except for the eastern bay, which is wider
and is separated from the others by a round column. At the west end is a
very narrow bay spanned at mid-height by a segmental arch. This may have
been connected with a gallery which has since been removed. The nave roof
trusses have tie-beams, king-posts rising to the ridge, and arch-braces
rising from the tie-beams to meet the king-posts below the ridge. All have
wall-posts carried on stone corbels, alternate trusses having longer posts
with curved braces rising from the corbels to meet in the centre of the
tie-beam. In the spandrels of the arches formed are timber quatrefoils.
The chancel arch is moulded and pointed. Between the south chapel and the
chancel is a three-bay arcade with round piers and foliated capitals. On
the north side is an organ set within a stone arch. Re-set on the aisle
walls are wall tablets of early C19 date. The east window contains late
C19 glass.