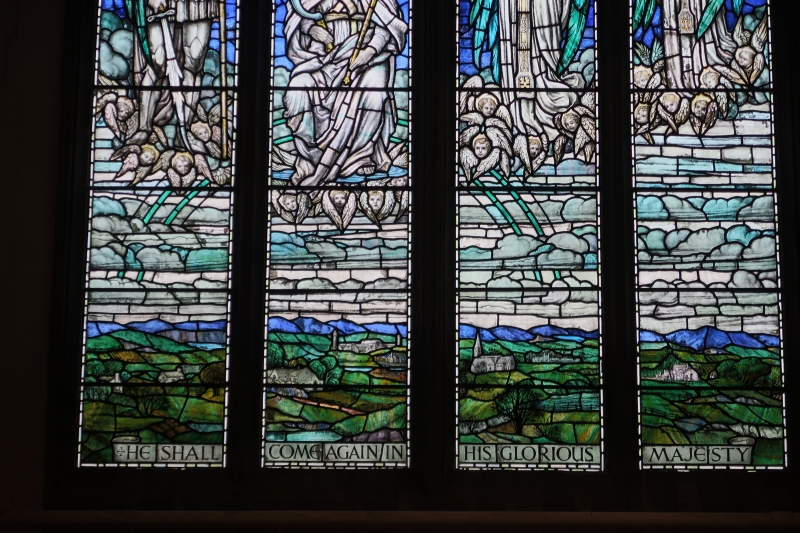 Church. 1849 by John Nash and Edwin Nash of Bermondsey in early English style,
with north and south aisles enlarged in 1861 and north and south transepts added,
nave lengthened and new chancel added in 1866. Built of Kentish ragstone with
Bath stone dressings and slate roof with alternate bands of plain and curved
slates and ridge tiles. Nave with north and south aisles, chancel, transepts and
south porch and north vestry. West tower with spire is 150 feet high. Lower in 3
stages with buttresses. Lower stage has trefoliated headed doorcases with corbel
heads 2nd stage has lancet window and clock face. 3rd or bell stage has paired
louvred lancets. Stone spire has lucarnes and cockerel weathervane. South aisle
has gable with lancet, rose window underneath and 2 lancets below to west face. 3
traceried windows to south. South porch approached up a flight of 5 stone steps.
Gable with saddlestone and quatrefoil light. Arched doorcase with colonnettes and
corbels and elaborate double door with traceried design. Transept has large gable
with trefoil window and 5 lancets with 1 arched window below. North aisle has
quatrefoil with traceried window below to west front, 4 arched windows separated
by buttresses to north front and transept has similar arrangement to south
transept with trefoil window, 5 lancets but arched doorcase below. Lower chancel
has lancet window and vestry built on to the north. Interior has nave with
arcading on octagonal stone piers and wooden post of arched braced type. North
aisle contains the King Edward VII window (the King was 29th in direct descent
from Earl Harold Godmisson the 1st known Lord of Penge). It contains the figures
of Temperance and Hope 'after' Burne Jones and was executed by William Morris and
Co in 1910. Elaborate pulpit with figure of St John the Evangelist said to have
been copied from St Bartholomew's Sydenham.