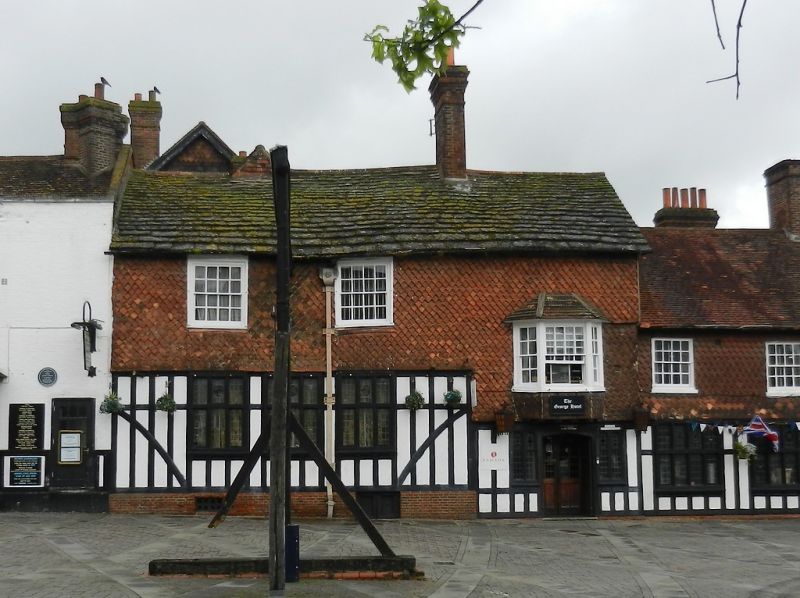 1. HIGH STREET
5403
(west side)
The George Hotel
TQ 2636 NE 5/33 21.6.48
II*
2.
Late C15 or early C16 timber-framed Inn which underwent considerable extensions and
alteration in the C18 and early C19. The front facing the High Street comprises 3 main
sections, both of 2-storeys, but the northernmost part has a roof considerably lower
than the southern section. The northern section which is probably C15 has modern
half-timber work to the ground floor and painted tile hanging above. Old tiled roof.
Two C18 canted bays with wooden glazing bars, one over the entrance, and one below the
gable. Modern mullioned windows to ground floor. The ground floor rooms have ceilings
exposed with massive beams and close set joists. C16 fireplace with 4 centred arch
and carved panels of spandrel from above. The date 1615 carved on it appears to have
been cut in recent times. King post roof in one bedroom. The middle section is of
circa 1600 but altered in the C18. The lower storey is modern half-timber work, the
first floor is tile hung. Two C18 sash windows with wooden glazing bars. The roof,
covered with Horsham slabs, extends northward over the south end of the northern section.
North gable end tile hung. Open fireplace with chimney beam in south wall of the
lounge. Brick stack of this chimney has shaft set diagonally with capping (circa 1600)
but enlarged on the south side when the south section of the Inn was built.
The southern section is probably of late C17 to early C18 date. Two storeys stuccoed.
Parapet. Two late C18 or early C19 sashes to upper storey, modern bay window to lower
storey. Rowlandson's print (1789) shows 2 upper windows with mullion and transom
and leaded panes in this section and roof with eaves. A large room running westward
behind the southern section was built as an Assembly Room early in the C19 but has
been much altered since the last war. The gallows sign spanning the road is a modern
successor of one shown in Rowlandson's print. The heyday of the George was in the
coaching period of the late C18 and early C19 when it was a hostelry of note on the
Brighton Road. Its first known reference is in the will of Richard Covert (1580)
(See Sussex Archaeological Collection XLVII p 134). In 1818 20,000 spectators watched
the prize fight between Ned Turner and Jack Randall outside the George. It features
in Conan Doyle's "Rodney Stone" as the Inn at which Belcher trained Boy Jim for his
fight with Crab Wilson on Crawley Down.