A Grade I Listed Building in Dronfield, Derbyshire 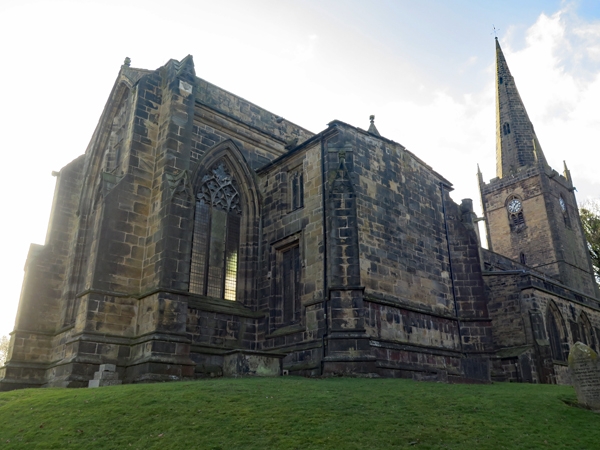 Four-stage
tower, rising from a deeply moulded three-tier plinth, with
shallow gabled diagonal buttresses, terminated at crocketed
corner pinnacles. Moulded string courses delineate tower stages.
Pointed-arched Perp 2-light windows to bell stage, all
incorporating clock faces. Hoodmoulds to windows project into
fourth stage and from part of the string course. Embattled Perp
ashlar parapet, with moulded tabling below, and grotesque
spouts. Spire with two tiers of lucarnes. Tower west doorway
with deeply moulded pointed arch, beneath a hoodmould with label
stops. One single order of C13 columns, 2-light Y-tracery
window above, with ogee hoodmould forming part of the
string course. South porch with shallow gable, with flat gable
copings. Moulded pointed arch to porch doorway, the inner arch
springing from moulded imposts. Hoodmould with carved stops.
Inner doorway. with steeply pointed triple stepped doorway. Roof
has two shallow arched roof trusses, with moulded principal
rafters rising from moulded wall posts. Trusses have carved
bosses, and support a single purlin and ridge purlin.
Five bay
south aisle with stepped angle buttresses to ends, and shallow
buttresses beneath windows to the east of the porch bay.
Shallow ashlar parapet above string course, pierced by clusters
of three trefoil lights, inserted 1866, to light galleries. The
two bays to the east of the porch have late C13 3-light pointed
windows with intersecting tracery beneath hoodmoulds. The
eastern-most bay has a Perp 3-light flat headed window with ogee
heads to the lights, with double daggers above. East end window
of 5-lights with intersecting tracery, the top intersections
replaced by a quatrefoil. Similar 4-light window, but without
quatrefoil to west end. Nave clerestory with three 2-light flat
headed windows with trefoil heads. Moulded string course links
windows heads with a shallow parapet above. Three-bay chancel,
rising from a two tier moulded plinth, the ridge taller than
that of the nave, with deeply moulded surrounds to pointed Dec
windows with restored intersecting tracery, and with cusped
quatrefoils at the heads. The window heads rise to the level of
a moulded string course, below an ashlar parapet with serpentine
decoration. Below the central window, and off-centre, a
priest's doorway with ogee-headed surround, beneath a stepped
string course linking the chancel window cills. Oak plank door.
At the west end, at the junction with the nave, a set back
panel, in order to avoid obstructing the window to the Lady
Chapel. Between the windows are tall stepped and gabled
buttresses, with blind sub-cusping, and pinnacles to gable
heads. These are repeated as clasping buttresses at the east
end. Tall 7-light east window, with deeply moulded Dec
surround, originally with Dec tracery, but now with moulded
major and minor mullions with transoms, inserted after the
collapse of the original tracery in 1563. Two-storeyed vestry
and sacristy to chancel north wall, with gabled and pinnacled
angle buttresses. East wall with flat headed 2-light window
beneath a hoodmould with stops to ground floor, 2-light first
floor window with ogee heads. Octagonal stair tower with squat
spire to angle of west wall and chancel, with lancets and
lucarnes, and a four-centred arched doorway to the west wall.
North aisle with C13 pointed 2-light windows, with quatrefoils
to the heads of the mullions. Ashlar parapet with clusters of
trefoil lights, as in south aisle. West end with 2-light
Y-tracery window. C20 link passage and extension to rear of
north aisle.

INTERIOR. Tall stepped and chamfer tower arch,
and a cluster of half shafts with simply moulded capitals. Four
bay nave arcade with stepped and chamfered arches, almost
semi-circular, but just pointed. Circular arcade piers, with
simply moulded capitals, and with roll and hollow mouldings to
the base of each column. Plain square plinths. Arcade
terminates at pendant corbels in chancel arch wall. Nave
clerestory above arcade, the window adjacent to the chancel arch
blocked and, almost at the junction of the nave north arcade and
the chancel arch, an ogee headed rood loft doorway with a
moulded surround. Stepped and chamfered pointed chancel arch,
with the line of a deeply pitched earlier nave roof clearly
visible from the nave. King-post trusses with cambered tie
beams supporting a single-purlin roof. Raking side struts
support the purlins, and the ridge is carried on longitudinal
braces from the king posts. Double stepped and chamfered
chancel arch, with simple mouldings to base and capitals. There
are squints on either side of the archway, with ogee headed
arches. Chancel north wall, with ogee headed doorway beneath a
stepped hoodmould, forming part of the continuous string course
which links the cills of the chancel windows. Doorway to
chancel south wall, with depressed pointed arch beneath a
stepped hoodmould, linked to the continuous string. Dec triple
sedilia with sub-cusped heads which have crockets and finials.
Octagonal shafts with moulded, capitals and bases separate the
seats. Detached piscina with ogee head, within which are two
smaller ogee-headed arches and a central shaft. The moulded
string is carried over the piscina, as a hoodmould. Simple
piscina to south aisle chapel south wall. Font against tower
arch, with plain octagonal medieval bowl, set on octagonal stem
and stepped base of 1916. Fluted C18 font near nave north door.

FURNISHINGS. Elaborately carved C17 oak pulpit with hexagonal
drum, the facets of which have arcade decoration and which are
separated by carved colonnettes, linking carved panelled bands
above and below. The pulpit was lowered in 1917, and the
staircase replaced by the present C19 cast-iron spiral stair.
Altar and reredos, 1907, by Advent Henstone of Tideswell. Some
remaining parts of C15 choir stalls, incorporated within C19
benches. Fragments of medieval glass are found in two chancel
south wall windows, and one to chancel north wall. Monuments.
Brass to Thomas Godfrey, d1399, Rector and his brother Richard,
in the chancel floor. Brass, comprising seven plates to John
Fanshawe, d1580, together with his wife Margaret, and their
children, on chancel north wall. Alabaster effigy to chest
tomb, Mid C15 to Sir Richard Barley, with side and end panel
depicting angels holding shields. The church contains over 120
brasses, monuments and memorials, many of which pave the nave
and chancel. Parish chest, with seven lock hasps, against the
south aisle wall.