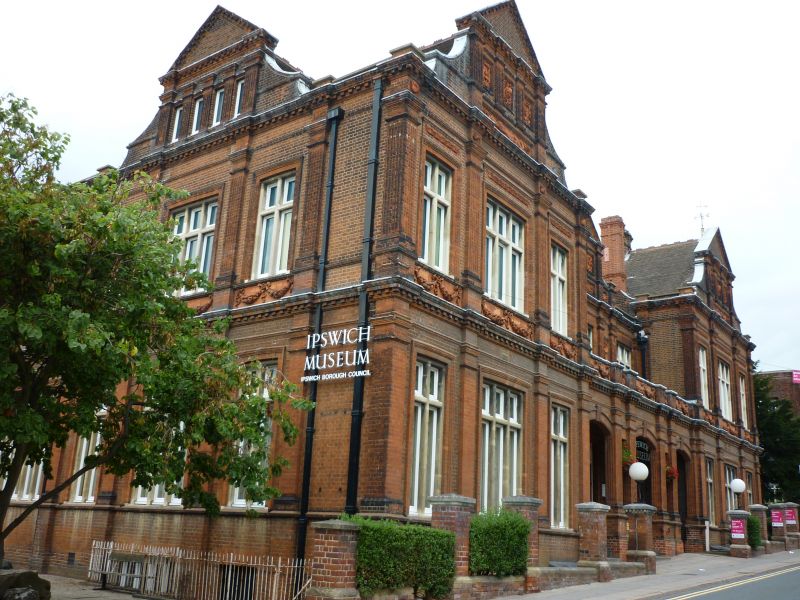 Entry Name: Ipswich Museum including the 1893 addition to north and the Art Gallery to south

HIGH STREET (West Side),
Ipswich Museum including the 1893 addition to north and the Art Gallery to south

Museum and Art Gallery. Dated 1880. By Horace Cheston for Ipswich Corporation.
Red brick with elaborate moulded and cut brick and terracotta ornamentation. Plain tile roofs with ornamental ridge and side stacks. It is in the C17 Renaissance style made popular by Norman Shaw.

EXTERIOR:
Gabled wings project at the north and south ends with Dutch gables and are connected on the front by a single storey open screen of paired fluted pillars and segmental arches. 2 storeys. 9 window range overall (arranged 3:3:3), stone mullioned and transomed casements with moulded brick architraves and ornamented panels of terracotta work above. The windows are framed by fluted brick pilasters and modillion cornices which run above each storey. The Dutch gables to the wings and centre part have terracotta ornamental panels, fluted pilasters and pediments.
The terracotta panels on the main front are particularly exquisite with plants, garlands, flowers, fruit, dragons, 3D shells of great delicacy and two portrait heads, Isaac Newton and William Hogarth. The double order of pilasters, those to the first floor finely fluted, go all round the main building as do the elaborate dentil cornices. The south front has a 5 window range and 2 Dutch gables, each with 4 windows framed by fluted brick pilasters. A later wing has been added at the west end. The north front has a 4 window range and 3 tall studio windows at the west end, with gables above.

INTERIOR:
The entrance hall in the main range has coffered ceilings to ground floor and landing and an open well staircase with elaborate iron balustrade. The design is repeated as the gallery balustrade in the main exhibition hall. This gallery is supported on decorative iron columns with openwork brackets in the same design as the balustrade. The hall has an open timber roof and retains fixed display cases, some brought into the new museum from the previous one but the majority purpose-built for the present museum. Other galleries also retain purpose-built cases and the museum also has original glazed or panelled doors.

Linked to the north of the main block is the addition of 1893 also by Horace Cheston and in the same style and materials with similar cut and moulded brickwork. Single storey. Two doorways with panelled doors and overlights have a 2-light cross window either side. Tall parapet above is divided into three panels by fluted pilasters and the central panel is filled with a decorative terracotta panel. The two studios inside have north-light roofs, matchboard panelling and original fireplaces. The northern end of this addition is attached to the former Suffolk College Art and Design School which dates from the 1930's and is not of special architectural interest.

Joined to the rear of the main range is a later red brick block dated 1900. 2 storeys. Divided into 8 bays by pilasters. The 2 central bays are wider and rise to Dutch gables. The windows are mullioned and transomed casements (4 light in the centre windows) The 3 outer windows on the upper storey are blocked. Brick modillion cornices extend across the front at eaves level and between the storeys.

Linked to the south is the Art Gallery also part of the original design and in the same materials. This was listed separately in 1977 and is now included with the museum as part of the whole complex. Main front of 2 storeys, 3 bays, centre projects with pediment and elliptical headed doorway and large 1st floor window. Ground floor left and right windows in segmental headed recesses with keyblocks. 2-light windows above. Moulded brick cornice and parapet with finials over corner pilasters. Right hand return of 5 bays divided by giant pilasters and with segmental headed recesses. Roof lights along ridge terminate in segmental gable. The link is now of two storeys, the ground floor original in the same style with ornamental doorway and pilasters and moulded and cut brickwork; the upper floor is simpler and is of the earlier C20.

HISTORY:
This museum complex was built by Ipswich Corporation as a combined museum, library, and Schools of Science and Art and Art Gallery with funds raised by public subscription. It was completed in 1880. This combination of the three central elements of the Victorian scientific education system - the library, the artefacts and the schools - in a single building is rare but is similar to the building at Nottingham of a year or two before, though in that example the 'schools' was a University College. However in Ipswich there is an unusual addition: art. For not only was there provision for art education in the way of teaching rooms and studios but there was a gallery as well, this last slightly to one side and set back but linked to the rest. This complete combination appears to be very unusual and of particular interest. The museum building is very fine and the good interiors retain unusual surviving museum cases. The whole complex was designed by Horace Cheston who won an open competion which attracted 10 entries. His design is in the C17 Renaissance style, then very up-to-date.
The schools quickly outgrew the acccommodation in the main building so that in 1893 an addition was built with funds gained by an additional Farthing Rate for technical education added to the rates in 1891. This extension was also designed by Horace Cheston who carefully followed his original design.

SUMMARY OF IMPORTANCE:
This ensemble is of outstanding importance for the quality of the exterior, the survival of the interior complete with original C19 fitted display cases, and for the historic interest of a complex public educational establishment built by a municipal corporation and combining both science and art. As rightly described 'the (main hall) interior has the highly evocative character and ambience of a bygone era and presents an excellent example of an almost unaltered late Victorian museum - now extremely rare.'