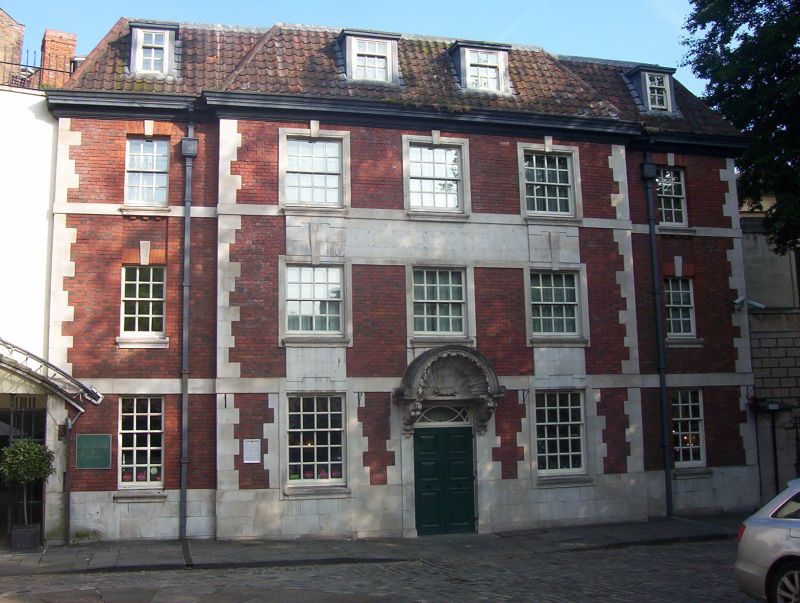 Also known as: The Sugar House LEWINS MEAD.
Sugar refinery and warehouse, now office and warehouse. C18,
C19 and early C20, including right-hand facade of 1922. Brick
with Portland dressings to the right section, rendered rubble
to the left, with pantile hipped roofs.
Complex of buildings with right-hand double-depth plan office,
left-hand warehouse, trapezoidal courtyard to rear with engine
house and stack. Edwardian Baroque style office facade. 3
storeys; 5-window range office, 4-window range warehouse.
The office has a symmetrical front with the middle 3 windows
and roof set forward, plinth, quoins, plat band and
second-floor sill band, and moulded timber eaves cornice. The
doorway has a large shell hood on acanthus brackets to a
boarded overlight and double 6-panel doors. Flanking windows
have quoins, upper ones with keyed architraves and ashlar
aprons, cut on the second floor by the tall key beneath, with
8/8-pane sashes, and 6/6-pane sashes to plain outer windows.
The right return has a 2-window range, with a gabled rear
block. The steep roof has a flat, leaded top.
The parapeted warehouse has blocked ground-floor windows, a
right-hand carriage arch with 11 stepped voussoirs, cambered
heads to the windows above, flat to those to the left, to
2-light casements with glazing bars. Roof in 3 hipped
sections. Former engine house has a square brick chimney.
INTERIOR not inspected; office section reported as having a
ground-floor left-hand room with complete C18 fielded
panelling, including eared fire surround; structure variously
timber or steel-framed. The central section of this block
appears to be the earlier part, late C18-early C19.
Details of the warehouse include a mixture of rubble and brick
walling with a single cast-iron column, one timber and one
brick post carrying a long flitch beam; first floor has 6
chamfered wood posts with pillows to a longitudinal beam,
second floor similar carrying slight C19 king post trusses;
concrete ground floor, wide plank first and second floors. A
C20 three-storey flat-roofed concrete and steel block returns
to back of the courtyard.
HISTORICAL NOTE: Bristol was an important centre for sugar
refining and several firms latterly operated in the Lewins
Mead area; this complex appears to be one of those and, though
altered, is of interest as an exceptionally complete and
historically important testament to this industry.
(Buchanon and Cossons: Industrial Archaeology of the Bristol
Region: Bristol: 1969-).