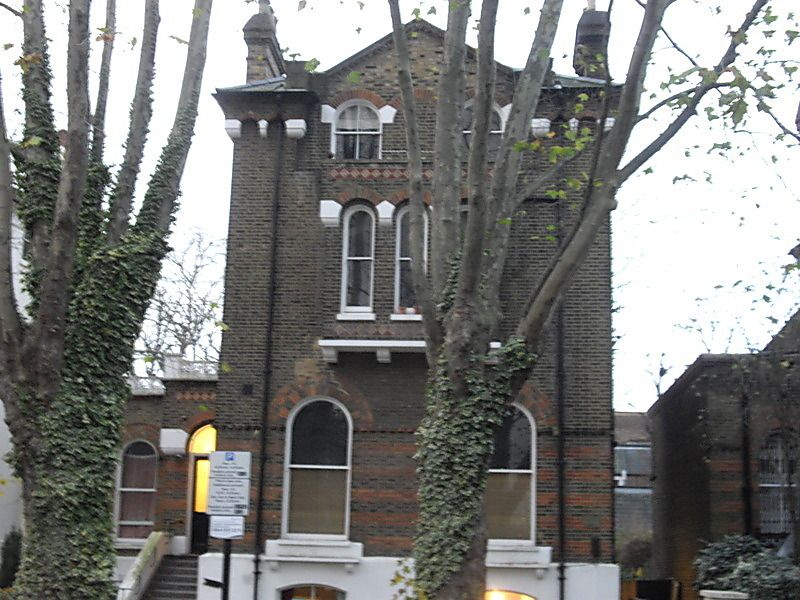 Detached house. 1856. Developed by Henry Rydon and designed by
Charles Hambridge. Yellow brick set in Flemish bond with
dressings of red brick, stucco and possibly also stone, tiles,
roof of artificial slate. Three storeys over basement,
three-window range. Steps up to round-arched entrance in
recessed single-storey wing to left: cornice, overlight and
panelled doors of original design; head of alternate red and
yellow brick, embattled parapet of stone or stucco; there is a
further single-storey wing of one-window range to the left,
recessed, and having, like the porch, cast iron window guards.
On the principal front the ground floor has red and yellow
brick in bands of three courses up to an impost band of bricks
set at an angle; round-arched windows with heads of red and
yellow brick; bracketed bay window to the first floor with
three round-arched windows, the heads of gauged red brick and
the upper part of the bay generally corbelled out on imposts;
bands of encaustic tiles above and below the windows;
second-floor window round-arched with heads of gauged red
brick under a shallow central gable, the eaves otherwise
carried on a Lombard frieze except where interrupted by
windows and side stacks; cornice of bricks set at an angle;
hipped roof. Two pairs of stuccoed panelled gate piers with
cornice, and balustraded wall between. This house matches no
47 Highbury New Park (q.v.) in design.
(London Journal: T.F.M.Hinchcliffe: 'Highbury New Park. A
nineteenth-century middle-class suburb': London: 1981-:
29-44).