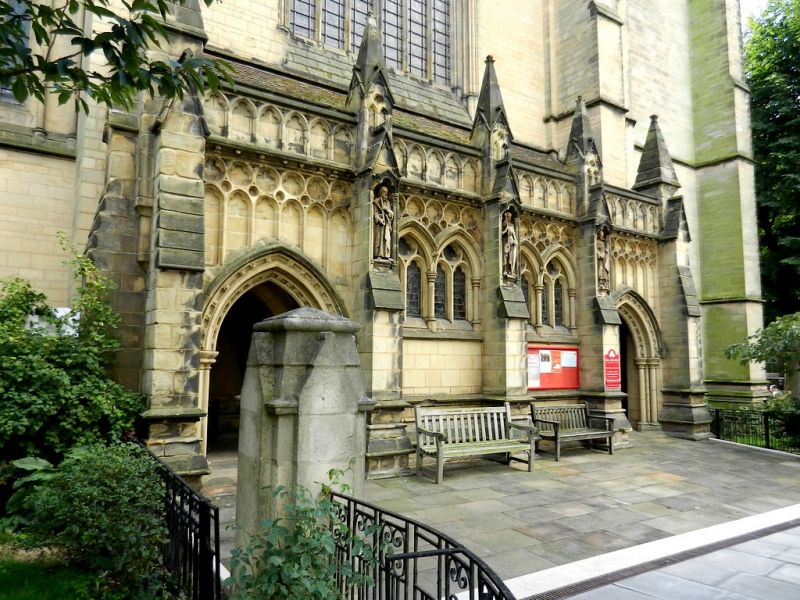 Parish church. Nave and aisles 1889-91, East end completed
1901, base of tower and narthex completed 1924. Architect
J.L.Pearson, work continued after his death in 1897 by his son
Frank Pearson.
C13 French Gothic style.
Sussex sandstone, slate roofs, coped verges.
Plan: chancel with north-east and south-east chapels, north
vestry, north and south transepts which are continuations of
the aisles, 5-bay aisled nave, narthex and base of south-west
tower.
Interior: ashlar stone. Arcade of clustered columns with
pointed arches in C13 style, stone ribs to roof rising between
clerestory windows, wooden open rafter roof to nave, monopitch
roofs to aisles, stone vaults to west end bays, 3-tiers of
windbracing to chancel.
Chancel: reredos carved by Nathaniel Hitch, as were 5 seats in
north wall and sedilia in south wall. Brass altar rails.
Highly ornate choir stalls carved with figures, donated 1915.
Finely carved wooden screen with canopy between south chapel
and south transept, given in memory of those who died in the
First World War.
Wrought-iron screen to north chapel dating from 1940s.
Sumptuous organ case designed by Frank Pearson and built 1915,
organ 1905 by William Hill and Son. Octagonal marble font,
ornate cover with pulley dated 1928. Brass eagle lectern. Fine
stained glass by Clayton and Bell, all designed by Clement
Bell, 3 east windows, large west window, rose window to north
transept, and elsewhere in the aisles.
There is said to be a statue of the founder and first
incumbent, the Rev Thomas Peacey in the south-west corner of
the second stage of the tower; Peacey had earlier commissioned
Pearson to build St Barnabus, Byron St (qv). The tower was
never completed.
All Saints became the parish church of Hove in 1892. A
magnificent interior.
(Dale A: Brighton Churches: 1989-).

This List entry has been amended to add the source for War Memorials Register. This source was not used in the compilation of this List entry but is added here as a guide for further reading, 5 December 2016.