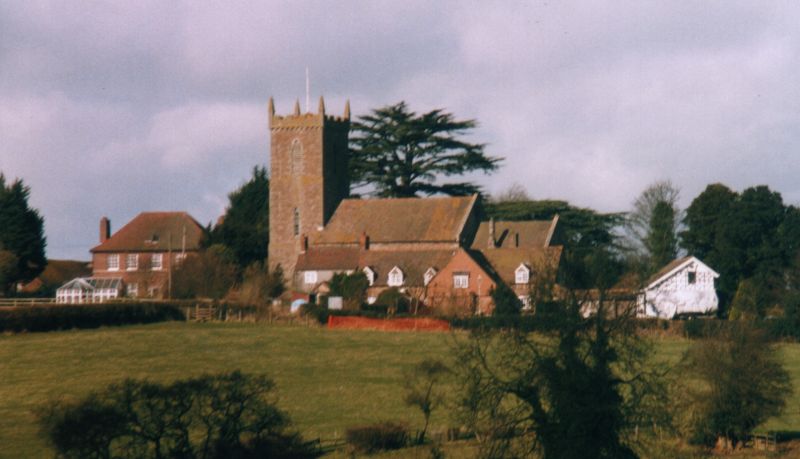 II*
DATES OF MAIN PHASES, NAME OF ARCHITECT:
C13 parish church, of which the nave was rebuilt in 1788, tower built 1828-30 by John Smalman, restoration and present porch of 1891-2 by Thomas Gordon.

EXTERIOR: Early-English chancel with nave in C19 Decorated style and tower in early-C19 Gothic style. The chancel has 2 lancets in north and south walls, and a blocked south door with continuous chamfer. A blocked lower arched opening is on the left side of the south wall (not visible inside), probably also a doorway. The triple lancet east window is 1891-92. The nave has moulded eaves cornice and coped gable. The only medieval feature is the C13 south doorway, which has 2 orders of nook shafts. The nave has two 2-light and 2 single-light windows in north and south walls, and a timber-framed south porch on a dwarf stone wall. There is a rose window in the east wall above the chancel, probably of 1788. The unbuttressed 3 stage tower has a 2-light Decorated west window of the late C19, but other openings are simple pointed windows and louvered bell openings of 1830. A corbel table is beneath the embattled parapet, which has corner pinnacles.

INTERIOR: The tall narrow tower arch has 2 orders of chamfer dying into the imposts. The nave roof is a 5-bay queen-post roof on corbelled brackets and moulded wooden cornice, probably of the early C19. The queen posts frame pointed arches with quatrefoil spandrels. The restored C13 2-centred chancel arch is on imposts with primitive head corbels of a man and woman, which have been re-cast in cement. The restored C17 2-bay chancel roof, which has 3 trusses, has cusped arched braces and stands on posts on head corbels. The square-headed piscina is matched on the north side by square-headed aumbry. Walls are plastered. The nave floor has red and black tiles, with parquet floor beneath pews. The stepped chancel floor has decorative, including encaustic, tiles.

PRINCIPAL FIXTURES: Fixtures are mainly C19. The plain octagonal font is mentioned in 1854. The pulpit has open arcaded Gothic panels, wood on an octagonal stone pedestal. Pews have ends with fielded panels, possibly early C19. The choir stalls have shaped ends with open Gothic fronts. The wooden communion rail has iron uprights with scrolled brackets. The reredos is a large, re-used Jacobean panel on corbels. The east window, showing the crucifixion with SS Peter, Paul and John, is dated 1893 by Lavers & Westlake. They also made the nave south window of Christ preaching, 1893. Unsigned windows also attributed to them are the chancel north window, depicting Ruth (post 1907), and nave windows showing Christ with Mary and Martha (post 1909), and the Good Shepherd (post 1898). The nave has neo-classical wall tablets to John Purton (d 1781), Thomas Pardoe (d 1802), Hester Purton (d 1810), and John Boker (d 1810) by Weale of Wolverhampton.

HISTORY: The core of the church is C13, of which the chancel and south door remain. The nave was rebuilt in 1788. The tower was built in 1828-30 by John Smalman, replacing an earlier tower. Restoration by Thomas Gordon in 1891-92 included refenestration of the nave, and replacing the chancel east window, with glass by Lavers & Westlake. The church was restored in 1981 when a west gallery was taken down.

REASONS FOR DESIGNATION: The church of St Giles, Chetton, is designated at Grade II* for the following principal reasons:
* For the extent of its C13 fabric, including the south doorway and the chancel.
* It's interior architectural features of interest, including C17 and early C19 chancel and nave roofs.
* The tower is a good example of the early C19 Gothic style